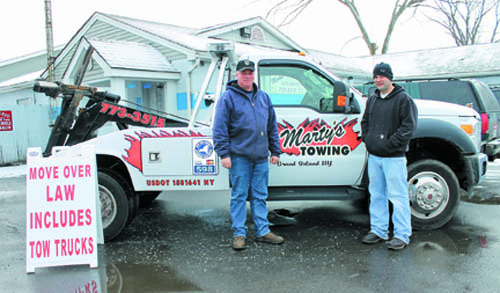 Move Over Law expanded to include tow trucks, maintenance vehicles

The extension of the current Move Over Law to include tow trucks and other maintenance vehicles is welcome news to those who job it is to help stranded motorists.

The staff at Marty's Towing of Grand Island remind drivers that an amendment to state vehicle and traffic law that starts Jan. 1 means drivers must move over for hazard vehicles like theirs with flashing amber lights.

Erik Ostertag, manager of Marty's Towing of Grand Island, said the law is needed in light of the decline in courtesy and attention by today's drivers.

"Everyone is in such a hurry nowadays," Ostertag said. "The risk of someone just not paying attention out there for us is unbelievable."

Joan McDonald, commissioner of the New York State Department of Transportation, said: "Drivers must be aware that the Move Over Law has been expanded to cover tow truck operators as well as construction and maintenance crews - in addition to laws already in place requiring them to move over for police who've pulled over motorists."

The new law stipulates that when possible motorists must change lanes when they approach a vehicle with flashing red or amber lights, or where there is only one lane, drivers must slow down. Hazard vehicles covered by the amendment to the law include not only tow trucks, but snow plows and maintenance vehicles. The amendment to the law takes effect Jan. 1, 2012. Those who violate the Move Over Law could face:

•Assessment of three points on a driving record.

Many Islanders are acutely aware of the dangers faced by those whose job takes them to the side of the major roadways. State Trooper Kevin Dobson of Grand Island was killed in April during a traffic stop, and four years ago a drunk driver struck and killed Kevin Coffta of Marty's Towing as he assisted a disabled vehicle.

"The risk is there. Especially for us after losing someone that we were all close with and worked with on a daily basis, it's in the back of your mind, just to add more stuff to worry about when you're out there," said Ostertag. "It makes it pretty nerve-wracking and unsettling."

Last month, a tow truck operator near Syracuse was struck and killed while tending to a disabled vehicle on the New York State Thruway. As well, roadside deaths in recent years have included a New York State Trooper in Westchester County, an Onondaga County Sheriff's deputy in Syracuse, and a man working on a lane striping crew in Erie County.

Ostertag has worked at Marty's Towing for seven years and had a close call in the lower Niagara section of the Thruway between the 198 and the Peace Bridge when a drunk driver in an Explorer flipped his car over right next to him.

"We've all had it. I've had mirrors hit and ripped off trucks," Ostertag said.

Mark Kowzan, owner of the Marty's Towing, has had more near misses than he'd care to remember.

"I've had numerous, numerous close calls. I've jumped over hoods of cars," Kowzan said. The distraction to drivers of cell phones and texting has added more risk to the job, Ostertag said. Kowzan said he's even seen people reading with the newspaper laid across the steering wheel while they're driving.

"Even if 20 percent of the people that learn of this start moving, it drops our risk by 20 percent of getting hit out there, either us, the equipment, or vehicles," Ostertag said.

"The job's a dangerous job. Every call we go out there is dangerous, and this makes it a little bit easier to do our job," Kowzan said of the amendment to the law.

Kowzan praised Ostertag for his efforts in bringing the omission of tow trucks in the initial Move Over Law to the attention of lawmakers.

Years ago, tow trucks were classified as emergency vehicles, Kowzan said, but at some point they were dropped from the classification, and when the Move Over Law went into into effect last year, Kowzan was disappointed to see tow trucks operators were not under the umbrella of the law's coverage. That's when Ostertag contacted State Sen. Mark Grisanti, who represents Grand Island in the State Senate, and former Assemblyman Sam Hoyt.

"Mark Grisanti really helped us out a lot," Kowzan said. "He sponsored the bill, he went on board with all the rest of the senators, and they got it passed."

"Hats off to Erik. He really worked hard at it and did a good job, so now it's finally going to be a reality," Kowzan said.

"Extension of the Move Over law to include maintenance crews and tow truck operators is critical, said Thomas J. Madison Jr., acting executive director of the New York State Thruway Authority. "This law gives Troop T of the State Police another enforcement tool to promote the No. 1 priority of the Thruway Authority - the safety of our customers and the people who serve them."

Kowzan used the word "rescue" to describe some of the work tow truck operators do, a sentiment reinforced by New York State Police Superintendent Joseph D'Amico.

"The men and women who work on our highways perform essential, often life-saving, services," D'Amico said. "It's always been common sense to move over to give them room to do their jobs, and now it's the law."

"Nobody thinks about the tow truck on the side of the road," Kowzan said. "And maybe now when they see the lights people will be courteous and move over or slow down a little bit."

"We're out there to rescue. It could be their family we're rescuing. The more people that move over, the easier it makes the job."