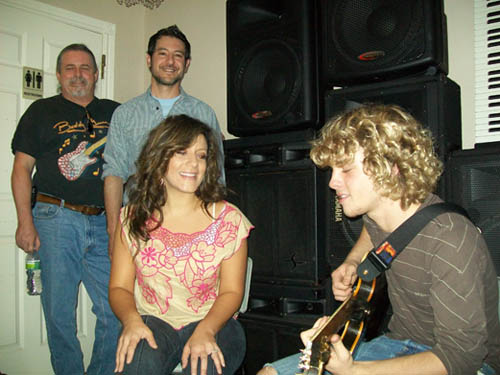 Tony Petrocelli will do just about anything for his students. The Lewiston Music owner offers lessons (guitar, drums, violin, clarinet, bass guitar, vocals), showcases his pupils in local events, and even drives out to the remotest parts of Western New York to deliver forgotten instruments to those just minutes away from recitals or concerts.

"I never really think twice about it," he says.

Nor does Petrocelli think much about tooting his own horn. While he'll do all of the above and more for his students, the one thing he won't do is brag. So we'll do it for him.

Petrocelli's generosity is a strong reason why Lewiston Music's student roster has grown from less than 10 when the store opened on Center Street five years ago to almost 70 at its new location at 105 S. Fourth St. The other reasons are his talent, which can be seen at events such as the Lewiston Music Festival, and his illogical buy-and-sell methods. Petrocelli sells musical instruments and equipment at low prices and then pays top dollar for patrons' trade-ins.

"I always tell people, 'If I don't have it, I can get it - and at a fair price," he says. Petrocelli's store has more than 35 guitars, drums, keyboards, band equipment and "all the little things that you need to pull off a gig that you don't always think of," like cables and adapters.

Petrocelli loves music - his parents were musicians who "never had to push me," he says. "I always just wanted to emulate them. I was a little ham." It's no surprise, then, to see him teaching music. But the opportunity to own Lewiston Music wasn't one he actively sought.

Five years ago, Petrocelli was a pharmaceutical sales rep. By chance, he heard from a friend that the newly established Lewiston Music was in search of another owner.

"I thought it would be fun to try," Petrocelli recalls. " 'Let's see what happens.' "

Coincidentally, his former industry started to take a dip, and Petrocelli realized it was "a good time to see if I could make a go of it."

Five years later, he has successfully expanded his business, his product line, and his clientele.

"I got lucky, for sure," Petrocelli says.

Though he has ample patrons, Petrocelli says he "treats every single customer as if it's the only customer I'll ever have."

His goal is to build up his students' self-esteem. Petrocelli says pupils often begin as timid and parent-clinging. A few lessons in, he says, they walk in confident, guitar-strapped and ready for the spotlight.

"That's been the most rewarding thing," Petrocelli says. "You just see them come out of their shell."

"It's easy to be yourself when you love what you do," he says.

Lewiston Music celebrated its fifth birthday on Nov. 1. The music store is located at 105 S. Fourth St. For more information, for repairs, or to set up lessons, call 754-0120.