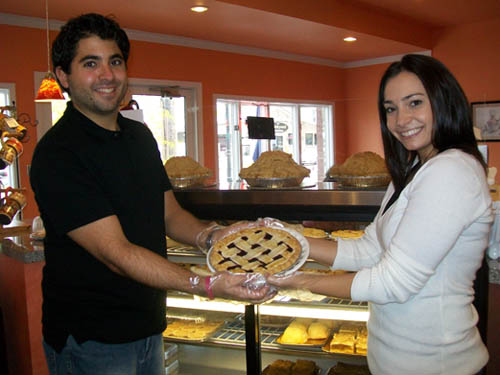 Michael and Lindsay Fiore pose with one of the from-scratch pies at the Village Bake Shoppe in Lewiston.

Why bake for the holidays when the Fiores will do it for you?

That's Michael Fiore's thought, anyway. He and his wife, Lindsay, are the new owners of the Village Bake Shoppe at 417 Center St., Lewiston. On Thursday morning, the store reopened with a new look, newly painted walls, the existing staff ... and former owner Bridget Schroeder's famous recipes.

The Fiores have known Bridget for several years. They've taken the no-mix recipes she mastered when she took over the store almost a decade ago and recreated cakes, pies, cookies and brownies that "can't be easily duplicated," Michael said Thursday.

Pairing high-end baked goods with a fresh décor, he said his plan is to develop the store into "more of an attraction."

"I want the Village Bake Shoppe to be a destination," Michael said.

To that end, he and his wife offer original-recipe desserts, customized orders and, in the coming months, will serve breakfast sandwiches and soups. The Fiores want their business to be a welcome stop for both the local community and out-of-town visitors.

"We are their hometown bakery," he said, and noted his staff is inclined to open early for those seeking coffee, or stay after-hours for last-minute snackers.

Michael and Lindsay have local ties to Lewiston. They took over the Village Bake Shoppe from the Hoferts, who decided to pursue other interests.

"I've always wanted to open my own business," Michael said. The Village of Lewiston was attractive, he added, because local customers "are phenomenal."

"My wife and I absolutely love Lewiston," Michael said. "We want to do their baking so they don't have to."

And, unlike Grandma, who's likely to bust out the wooden spoon if guests aren't 100 percent satisfied, Michael welcomes any and all feedback from patrons.

"I want them to tell me," he said. "My goal is to make everyone happy."

The Village Bake Shoppe's hours of operation are from early morning - around 6 a.m. - until 9 p.m., Monday through Saturday, and until about 7:30 p.m. on Sunday. For more information, call 754-2300 or "Like" the store on Facebook.

The store will officially celebrate its re-opening with a ribbon-cutting ceremony on Friday, Dec. 2. This event will coincide with the holiday tree lighting at Hennepin Park.