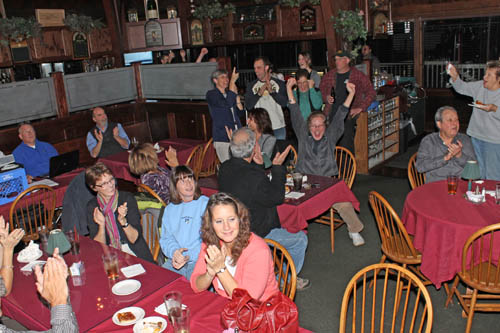 Someone lit a fire under the Grand Island Republican Party on Election Day.

The political right on the Island won both Town Board seats as well, as incumbent Republican Dick Crawford and incumbent Conservative Gary Roesch easily turned back Democrats Jim Sharpe and Norm Moorhouse.

"I would call it a fantastic win for the GOP today," Republican Party Committee Chair Debora Michaux said. "I think the people on Grand Island were ready for a change, I think that Mary ran a great campaign. I think we are a united organization and we put our money and our time in the right places."

Michaux said the campaign followed the game plan to the letter, and it spelled success this year. Cooke's result reversed a loss she took against McMahon four years ago.

"You're supposed to touch people three times," Michaux said, with door-to-door contact, mailings and phone calls. "We did that."

In her victory speech to party supporters, Cooke said, "I couldn't be more pleased and I couldn't have done it without everybody here and a ton of other people. This is never an individual effort."

She said the campaign was an ongoing commitment since Christmas for her and her family. She praised Michaux and the other candidates for their teamwork in getting the job done, as well as her army of volunteers.

"A bunch of people here were in this very building a couple weeks ago assembling packets that went all over the Island," Cooke noted. "I can't thank you enough. It's that kind of thing that just very slowly worked and worked and worked and led to tonight. It is very gratifying. It is everybody's victory."

She said the Facebook campaign she waged will continue within her party to help Island voters find a home within the GOP and to "get young people involved in our Republican Party and the Conservative Party and get those core values and those ideals talked about, so that young people can do something besides register blank. We have a huge issue with that here on the Island. We are approaching 3,000 people who decided they don't need a political party."

"We've got lots to do. Thank you so much for all that you did," she said.

The arson of some political signs in the days leading up to the election may have had an impact on the race, Michaux said. No one has been identified in the weekend torching of Republican and Conservative signs.

In winning his fifth term, Crawford said: "I'm very satisfied and honored that the citizens of Grand Island kept me in my seat. It's been an honor and a privilege to have worked for the taxpayer, and we will continue to work as hard as we have the last four terms and continue to do the work to make our Island as unique as it is.

Roesch was the top vote-getter in the council race. He thanked the committee and "the largest number of volunteers helping me out that you could imagine. And it was a committee that was made up of not only Conservatives, Republicans and Independence, but Democrats as well. We all worked together and made it happen."

He said his focus in the four years will continue in economic development for the Island.

In county races, the Grand Island electorate sided with two of the three winners.

Chris Collins beat Mark Poloncarz on the Island 3,540 to 2,137 in the race for Erie County executive. Poloncarz beat the incumbent Republican in a contentious race.

In the race for 4th District Erie County Legislator, incumbent Kevin Hardwick received 3,771 votes on the Island to challenger Jeremy Zellner's 1,625. He won the race with 59 percent of the vote.

In the race for Erie County clerk to replace Kathy Hochul, Christopher Jacobs had 3,391 Island votes to Maria Whyte's 1,991. Jacobs had 51 percent of the vote in the win.