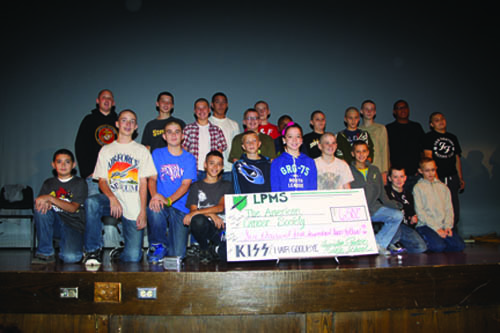 Lew-Port Middle School 'buzzes' for a good cause

Photos and story by Janet Schultz

Lewiston-Porter Middle School was buzzing Monday, but not with noise, with hair clippers.

It was the "Kiss Your Hair Goodbye" event, with 22 students and 11 faculty/staff members getting their hair buzzed. The group made a pledge that if the students collected more than a certain amount of dollars, they would buzz their hair. Many set the limit at around $2,000 to $4,000. Also some staff agreed to dye their hair, if a certain goal was met.

Well, to Principal Karen Cuddy-Miller's surprise, they reached that goal and exceeded, and she found herself with pink hair for the day!

Hannah Mergi, a sixth grader, decided a week ago that she would buzz her hair in advance and found herself the "poster child" for others. The money came in and the Middle School surpassed their past donations of $2,700 the first year and $3,300 the second. This event is held every three years.

"When the students saw her buzz her hair the donations came in in her honor and the students became even more motivated," said Cuddy-Miller. "She is a true leader."

Denis Scinta, founder of the event, has a family affected with cancer and wants students to be aware that one out of every two men and one out of every three women are at risk for cancer. The "KISS" comes from his love of the rock group, thus the phrase Kiss Your Hair Goodbye.

One of the highlights of the event was the announcement that several students had been selected at random to make the first "buzz" on their teachers.

Mergi made the first cut on teacher Walter Cook, as the entire Middle School cheered her on and applauded Cook for his "courage."

Cheers rang out when teacher Edward Koban took to the stage with his long locks and had them cut first by Natalia Pantoja and then by Clay. Koban had his haircut for Locks of Love recently and in addition to donating and being buzzed, gave this cutting to Locks of Love.

More cheers rang out as Maureen Castiglione, a cancer survivor, had the little bit of hair she has remaining after treatments not only dyed pink but buzzed. Castiglione is a staff member in the Middle School. Her daughters were with her to share in the moment.

Last but not least was event organizer Scinta, buzzed ceremoniously by Mergi, and then totally by Clay.