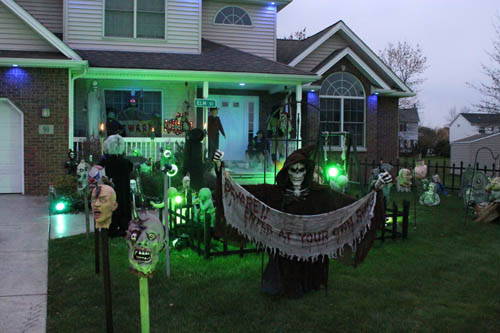 Podgorny has turned his garage and driveway into a haunted house for eight years, half of those years on Grand Island since moving from Tonawanda. It features strobe lights, creepy music, a fog machine and life-sized animatronic figures. An 8-foot Frankenstein monster rises up as guests walk by him, thanks to outdoor light sensors.

"The kids enjoy it. I enjoy it. We're huge Halloween fans," Podgorny said of his annual holiday house that he sets up for neighborhood children. Podgorny said he thinks up ideas for his Halloween display all year long and then starts putting the pieces together in the summer.

"And we just keep kind of adding every year." He doubled the size of his setup this time around, adding a 10-foot by 20-foot addition that extended the display to the end of his driveway.

"I try to change it up every year. Like our usual toxic puker, I turned him into a clown," Podgorny said.

Is he still vomiting?

"Yep, still vomiting. Everybody seems to like him the best."

Last week, Podgorny took the setup to the Elks Club in North Tonawanda in a benefit for cerebral palsy.

"Awesome" was how several zombies described Debbie and Mike Driscoll's display on Blue Jay Lane. "It's the best one on the Island," said another.

"We started out with just a graveyard, and then we added the pirate island and the clowns over here," Mike said of the display his family has been doing for at least the last six years. It usually takes a week to set up the display, Debbie said. "Everybody just loves it. It's so worthwhile," Debbie said. It's even become a tourist attraction, with people stopping by to see it and take photos.

"They drive by nonstop," Mike said.