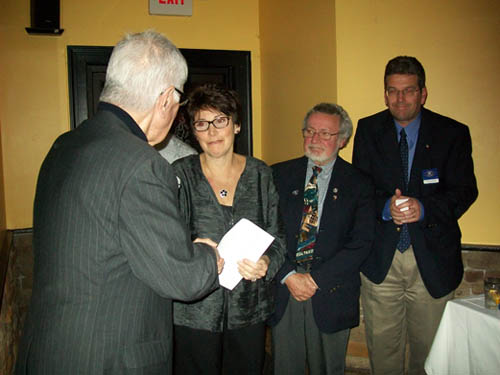 Lewiston Kiwanis Club donates $4,000 to It Happened to Alexa Foundation

The Lewiston Kiwanis Club presented a $4,000 check to It Happened to Alexa Foundation co-founder Stacey Branchini on Wednesday. The money was raised as part of the club's annual "Fun Run," held during the Peach Festival. The Lewiston-based It Happened to Alexa Foundation assists rape victims and their families by easing the financial burden they face while traveling to attend related criminal trials.

Branchini is pictured, photo 1, speaking to club members as Tom Baia intently looks on. In picture 2, Baia and Kiwanians Jerry Mosey and Jeff Sanderson presented Branchini with the check and a club bell. For more information on the foundation, visit its website at www.ithappenedtoalexa.org.