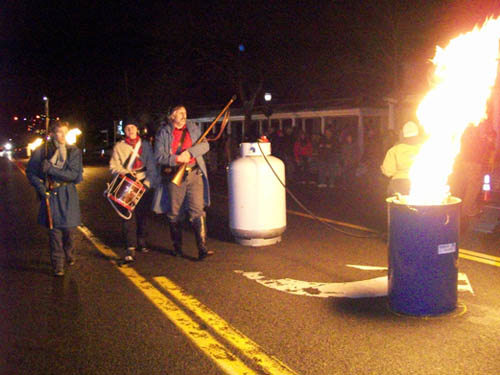 Board approves Center Street closing for 'Flames Through Lewiston'

Lee Simonson said the second annual "Flames Through Lewiston" event "will be bigger than ever." The Historical Association of Lewiston's volunteer 1812 bicentennial director was on hand Monday at the Village of Lewiston Board meeting. He was requesting permission to close Center Street on Saturday, Dec. 17, for this year's commemoration of the burning of Lewiston.

"Last year, we didn't really know what to expect," Simonson said, noting the Historical Association of Lewiston was anticipating about 200 people would show up to watch the historical re-enactments.

In all actuality, Simonson said a "couple thousand" people were on hand to admire the mid-December show - and the eight-foot-by-three-foot fire drums, which were situated in the middle of Center Street.

"It was quite an impressive site to see," he said.

Trustees approved the closing of Center Street, from Fifth to Fourth streets, from 5 until 8:30 p.m. The majority of that three-and-a-half-hour block will be used to setup the fire drums.

The "Flames Through Lewiston" performance will begin at 6:30 p.m., and should last about 30 minutes.

At last year's "Flames Through Lewiston," Center Street's restaurants were filled to the brim with onlookers taking window seats to watch the show.

"The feedback we got from the restaurants was fantastic," Simonson said. "Business was booming."

This year, Simonson said actors will portray British soldiers with muskets, American forces, and the brave Tuscarora warriors who stepped in to fend off the attack on Lewiston and usher its people out of harm's way.

"We may have a few dead people in the street," Simonson deadpanned.

The commemoration of the Dec. 19, 1813, burning also will boast a stronger sound system, with additional speakers on Center Street.

"It's going to be a much more complete presentation," Simonson said.

Volunteer actors - those dressed in costume, in particular - are welcome to attend a post-performance buffet at The Brickyard Pub & BBQ at 432 Center St.

In approving HAL's street-closing request, Village of Lewiston Mayor Terry Collesano said, "They're not going to burn the village down this time."