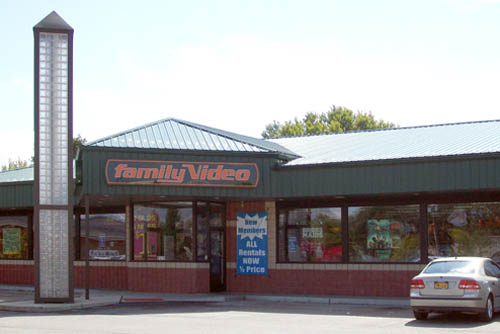 Workers are sought for the Lewiston Family Video store, which, internally, will resemble the location on Niagara Falls Boulevard in Niagara Falls.

Move over, Redbox, you've got some competition.

Family Video is taking over the former Blockbuster store location in Center Street's Rite Aid plaza, and is slated to open on Friday.

Family Video offers everything Blockbuster did, in terms of rentals, but without the extraneous items (like, say, a Snuggie) and at lower prices.

"Eighty percent of our store is a dollar or two-for-a-dollar," Bezenah said.

Children's movies can be rented for free, just like at a library. New rentals are $2.79 and "We get them; they don't," Bezenah said of competitors Redbox and Netflix, two popular rental companies that don't offer as many titles when new releases come out each Tuesday.

Now, for those wondering how Family Video can succeed in a location where another chain rental store seemingly failed, Bezenah said Blockbuster was better off than it appeared.

"We know it was a good store for them," he said, noting Blockbuster's move was due more to a territorial reorganization than a lack of sales in the village.

Moreover, Bezenah said customers will notice "when it comes to selection, when it comes to pricing, nobody competes with us." Additionally, he said Family Video workers are known for "providing the (customer) service I know everybody wants."

Family Video plans to offer between eight and 10 jobs at its new Lewiston location. This, too, is what separates the company from Redbox and Netflix, Bezenah said.

"They're not investing in communities," he said, adding Family Video pays property taxes and, nationally, is adding 1,000 new jobs.

"And we're expanding," he said. "We see the opportunity in markets to come into."

Bezenah said Family Video will have a soft opening but expects to make a splash in the weeks to come. His company, he noted, likes to get involved with local initiatives and give back to worthy causes.

The rental store will open at 10 a.m. seven days a week. Bezenah encouraged new customers (ages 18 and up) to become a member. New accountholders are entitled to half-off rentals for the first 30 days after they register, as well as $40 in coupons, and a free rental upon completion of a company survey. There is no cost to join.

Family Video is the second largest video chain in the U.S., with 750 locations (including 25 in Western and Central New York). Apply online at www.familyvideo.com.