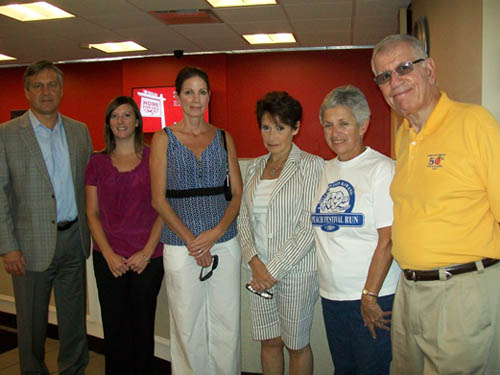 Kiwanis 'Fun Run' to benefit It Happened to Alexa Foundation

The 33rd annual 5K "Fun Run" and 1-mile walk will kick off the first full day of the Lewiston Kiwanis Peach Festival on the morning of Saturday, Sept. 10. This year's race is especially important, as all proceeds will benefit a national charity founded right here in Lewiston.

The It Happened to Alexa Foundation was formed to help rape victims and their families by easing the financial burdens they undergo while traveling to attend the criminal trial. It was founded by Tom and Stacey Branchini of Lewiston, whose daughter, Alexa, was assaulted her freshman year of college at Boston University.

"We had to drive back and forth to the trial in Boston; my husband had to leave work, and we had to get a babysitter. We were lucky to be able to afford that, but many people can't," said Stacey Branchini. "Either the perpetrator gets away, or while they're in jail eating three meals a day the victim loses their job or drops out of school from the financial costs."

"There's a 6 percent national average for rape conviction," said Ellen Augello, It Happened to Alexa Foundation executive director. "Whereas our foundation gets a conviction 86 percent of the time."

The foundation's support allows the victims to therefore be prepared and confident for trial. The foundation not only offers financial assistance, but emotional assistance as well. It takes the victim's parents into consideration, and helps them to help their child.

"We're thrilled that the Kiwanis chose us as a beneficiary," Augello said.

The run/walk has aided 32 different organizations. To date, almost $100,000 has been raised.

"It all started 33 years ago, when the Peach Festival would start Saturday morning instead of Friday night," said Tom Baia, who founded the event and now serves as event chairman. "Mimi (Cacciatore) and I were running and thought it'd be a nice idea to start the festival each year with a race."

In the past few years, more than 250 participants have turned out to run or walk - not only from the Lewiston-Porter area, but from Buffalo and Canada, too.

Almost $3,000 in proceeds went last year to the Make-A-Wish Foundation.

"We try to pick the charities that will be most beneficial," said Baia. "I've known Ellen for a few years, and she does a wonderful job. So I thought it'd be good to give her charity the money."

The race is co-sponsored by KeyBank of WNY. It will start at the Lewiston KeyBank branch on the corner of Fifth and Center streets in Lewiston. Registration starts at 7:45 a.m., with the 1-mile walk beginning at 8:45 a.m., and the 5K run at 9 a.m.

The run and walk both have an entry fee of $20, which includes a T-shirt. Prizes will be awarded to those with the most funds raised.

The It Happened to Alexa Foundation will hold an after-party at Water Street Landing from 1 to 3 p.m. following the race. The party will include basket raffles and entertainment by Free Henry!.

Entry to the party is free for all runners and walkers. For more information on the race, call 745-9702, 297-5831 or visit www.lewistonkiwanis.org.