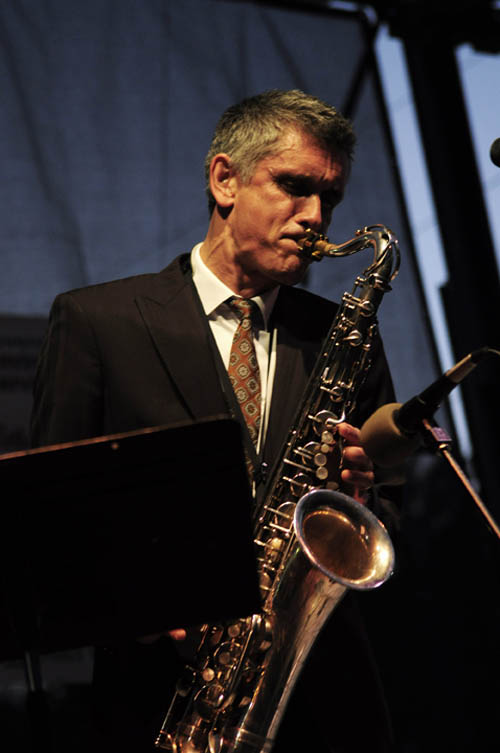 "It's a very attractive event," said Sandy Hays Mies, executive director of the Lewiston Jazz Festival. "People have the opportunity to hear great performers and see the ambiance of Center Street."

"We have really gone all out this year with the lineup of artists, food and jewelry," said Carol Calato, chairwoman of the Lewiston Jazz Festival board of directors.

In addition to the 150 musicians and 40 performers, this year's event will offer two headliners instead of one.

"All types of jazz are covered between the artists and headliners," said Mies. "It crosses all aspects, from bebop to fusion to contemporary."

On Friday, Canada's Hilario Duran's Latin Jazz Band with Jane Bunnett will perform his greatest hits on the main stage. The talented musician was named as one of the 10 most influential Hispanic Canadians in 2009 and is known worldwide as a Cuban piano master. He has worked with well-known jazz artists, including Dizzy Gillespie and Arturo Sandoval.

"I am so excited to have Hilario Duran," said Calato. "We've never had so much response from our lineup."

"Latin jazz will have such a great appeal to the audience," said Mies.

Kurt Elling will show off "all that jazz" by singing hit sensations inspired by the Beatles, Herbie Hancock, Miles Davis and Stevie Wonder. The jazz vocalist is a Grammy winner and was named "Male Singer of the Year" by the Jazz Journalists Association. In addition to his numerous awards, record-selling CDs, Grammy nominations for all his music, and features on CNN, "CBS Sunday Morning" and "Ramsey Lewis's Legends on Jazz," he was declared by the New York Times as "standout male vocalist of our time." Elling performed at the Obama administration's first state dinner and has worked with artists such as Dave Brubeck, Al Jarreau and Christian McBride.

"Kurt is just amazing and so talented," said Mies.

Local residents Beishline and Mitchell have performed every year at the festival. Together, the dynamic duo offers an unforgettable performance, with beautiful vocals from Mitchell, and great base and drum playing from Beishline.

"We both stated out playing when we were kids and have thus realized music can be improvised," said Beishline.

Their hard work and years of practice have really paid off - from jazz standards to hot American music, the duo can perform it all.

"They put together a beautiful interpretation of jazz and blues," said Mies.

"Jim is a local pianist, arranger and great educator. Janice is a wonderful singer with a beautiful voice," said Calato.

Jazzman Malinverni is a Lewiston native who brings jazz to a whole new level. He was named by the Boston Herald as "one of New York's great pianists of all time." From contemporary to modern, Malinverni can play tunes to satisfy every jazz fan's senses.

"He is just a hometown hero," said Mies. "We are thrilled to have him perform this year."

"Peter can do it all," said Calato. "He's a phenomenal composer, pianist and audience pleaser."

Malinverni has performed in New York's Carnegie Hall, Symphony Space, Blue Note and in worldwide tours. He did a guest appearance on NPR's "Piano Jazz" and worked with well-known artists such as Elvis Costello.

The Jazz Festival is not all about music - plenty of food and wine will be available for guests to enjoy. Many local restaurants are providing delicious food to satisfy every guest's appetite and sweet tooth. Local eateries such as the The Silo, Brio, Casa Antica and DiCamillo's are among the 16 expected to showcase at this year's Jazz Festival.

"The food is great," said Mies. "We use these restaurants for the festival because we would never want to take away from the great businesses in Lewiston."

If guests do not like eating outdoors, they are welcome to enjoy the jazz inside Lewiston's popular restaurants. The Brickyard, Water Street Landing, Carmelo's, Tin Pan Alley, Casa Antica and The Silo will all feature great jazz performances on Friday and Saturday.

Food goes well with wine. Throughout the weekend visitors can experience the quality offerings of the Niagara County Wine Trail.

And visitors can also partake in a jewelry show, where they can buy vintage and contemporary jewelry and see the mint-condition classics at the annual car show.

"Everyone should attend," said Calato. "It's an opportunity to hear great American music, and it's free."

The Historic Lewiston Jazz Festival Inc. is a not-for-profit corporation governed by a board of directors. The event is regarded throughout Western New York as one of the greatest jazz festivals in the region, and is one of the biggest attractions held in Lewiston, drawing a two-day attendance of 40,000. Jazz aficionados of all ages attend, including local residents, visitors from throughout the area, the U.S., and even the far reaches of the world.

The Jazz Festival takes place on Center Street between Fourth and Seventh streets on Friday, from 5 to 10 p.m., and from noon to 10 p.m. on Saturday. Niagara Falls Coach Lines is offering free parking and shuttle service between Artpark's lower level parking lot and the festival to better accommodate guests.