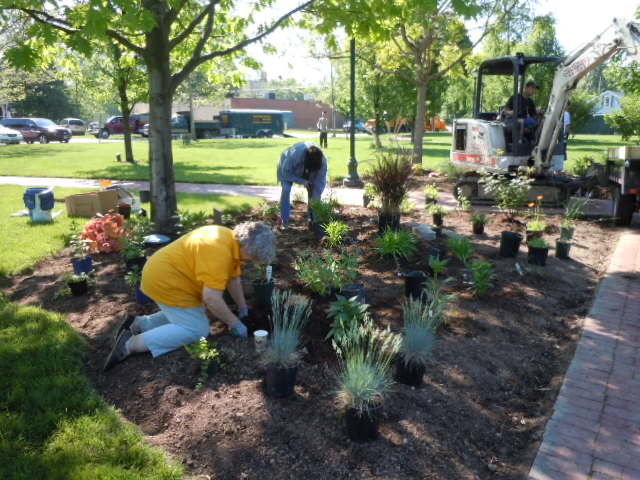 As part of the annual Youngstown Community Picnic Day on Saturday, Aug. 20, the Village of Youngstown host guest speakers and invited guests from throughout the binational Niagara region, as the fourth U.S. 1812 Bicentennial Art of Peace Garden is launched and dedicated. The event begins at 2 p.m. in Falkner Park (between North Second and Main streets). Political, business, tourism and cultural invitees will join numerous community families and local citizens enjoying the park activities that day.

The Bicentennial Art of Peace Garden Trail is an initiative undertaken by the Binational Economic & Tourism Alliance, Canadian and U.S. community partners from the Niagara, Hamilton, Haldimand, Norfolk, Brant and Halton regions, as well as the eight counties of Western New York, and the International Peace Garden Foundation. The goal is to create a cross-border Peace Garden Trail throughout the Niagara Frontier territory of the War of 1812 that commemorates 200 years of peace between the U.S. and Canada. The peace gardens will provide a wide variety of cultural programming year-round for residents and visitors to the area, and stand as a lasting legacy to the longest undefended border in the world and the friendship between the two countries.

Starting at noon, local author Norah Perez will sell and sign her new regional, historical fiction, "1812 River Burning," which embraces the story of the human suffering in Newark (Niagara-on-the-Lake) and Youngstown in December of 1813.

Prior to the ceremony, the Old Fort Niagara Fife and Drum Ensemble will entertain with 1812 music. The dedication will begin at 2 p.m. with professional bugler Lew Custode playing assembly, alerting people to gather under the large tent. Members of the U.S. Coast Guard Station Niagara will raise the U.S. and Canadian 1812 flags. Lewiston-Porter junior ROTC members will post the flags at the podium in the tent.

As part of the dedication ceremony, four school children representing the Lewiston-Porter Intermediate Center and the Tuscarora school will share in adding additional plants to the Peace Garden. Brick-buyers in attendance will be asked to stand, and audience dignitaries will be introduced. The ceremony will end with the bugler playing "To the Colors."

The Red Brick School parking lot (corner of Lockport and Third streets) will be provided for guest speakers and invited guests only. A registration table in Falkner Park with official nametags will open by noon for those people. The dedication will be followed by a meet-and-greet community reception for all to attend.

A second free event, scheduled for Friday, Sept. 16, at 6 p.m. at the Peace Garden, will feature musician, historian and re-enactor Raya Lee, who will present a multigenerational multimedia program titled "1812 - WHO? WHAT? WHEN? WHERE? WHY?" Families are encouraged to attend this activity, which is sponsored by the Village of Youngstown.