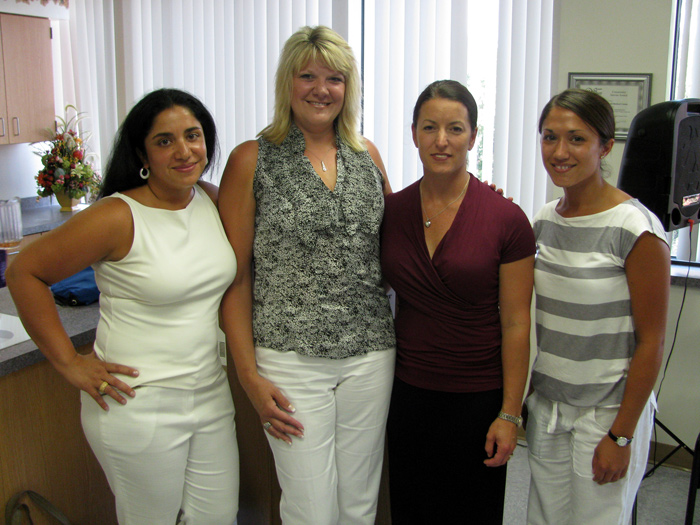 Local physicians and hospital officials and staff were celebrating the new partnership between Memorial and Women's Medicine of Niagara.

The doctors (all women) at Women's Medicine will now perform their labor, delivery and surgical services at Memorial, while maintaining their offices at 5320 Military Road, Lewiston, and their new second office at 2279 Grand Island Blvd., Grand Island.

In just the obstetric area, the partnership is expected to double the number of babies born annually at Memorial to 850 in the next 12 months and to exceed 1,000 births annually over the next three years.

Dr. Daniel Burns, chief of obstetrics/gynecology at Memorial, said the partnership will complement the hospital's existing staff and services "to form a women's center of excellence."

"Together, I think we're going to have a very special thing here," Burns said.

Dr. Renee Taefi Baughman said she and other members of Women's Medicine of Niagara chose to link with Memorial because of its newly renovated labor and delivery wing, private labor and delivery suites, around-the-clock anesthesia services and available neonatal and perinatal expertise for high-risk pregnancies.

"Memorial is really putting women's health as their No. 1 priority. It was something we couldn't walk away from," Baughman said, explaining why they chose to partner with Memorial when their Lewiston office is so close to Mount St. Mary's Hospital and Health Center.

Plus, she pointed out, although she and her fellow doctors love their work, they also have their own families. Now, while maintaining separate practices, they will be able to share weekend and evening calls with Burns. The partnership also will allow them to expand the new Grand Island office.

Women's Medicine of Niagara is unique in and of itself.

The original Lewiston practice, the Gynecological and Obstetrics Association of Western New York, began to change as the players changed in the office. Dr. Donna Azam Feldman said when she joined the practice, it already had a long-standing reputation for gynecological excellence.

"We wanted to move forward and continue the legacy they left us," Feldman said.

Baughman said they started to look at what else could be offered to women beyond obstetrics and gynecological services.

The practice's doctors are all women (the only male on the staff is acupuncturist Destin J. Radder).

Most of the doctors and staff grew up right here in Western New York. The doctors grew up in medical families. Baughman grew up on Grand Island, the daughter of now retired Dr. Parviz Taefi, and is raising her own family on Grand Island. Dr. Rachel G. Weselak, grew up in Detroit, the daughter of a nurse, but did her residency in Buffalo and married a Grand Island resident. Feldman, now a Lewiston resident, grew up in Williamsville and her father is a Niagara County physician. Physicians assistant Laura M. DeBacco and nurse practitioner Andrea Marie Rosati are from Niagara Falls and acupuncturist Radder is from the Clarence area.

One example of the openness of Women's Medicine of Niagara to change and new ideas is that acupuncture and herbal medicine aren't often found side-by-side with traditional medicine, especially in this area.

"Western New York has always been slow when it comes to non-traditional medicine," Baughman pointed out

Radder, who first experienced acupuncture as a youth when he injured his hip in gymnastics, trained for four years in California.

Traditional and non-traditional medicine each have different strengths and weaknesses and can complement each other, Radder said. For instance, his expertise can help with everything from fetal positioning to nausea to back pain. Acupuncture and herbal medicine have been used for thousands of years to treat just about everything, he said.

"It's really a different way to look at the body," he said.

While Women's Health focuses on women, it does have some male patients.

"I've been asked to bring in some magazines like Sports Illustrated," Radder joked.