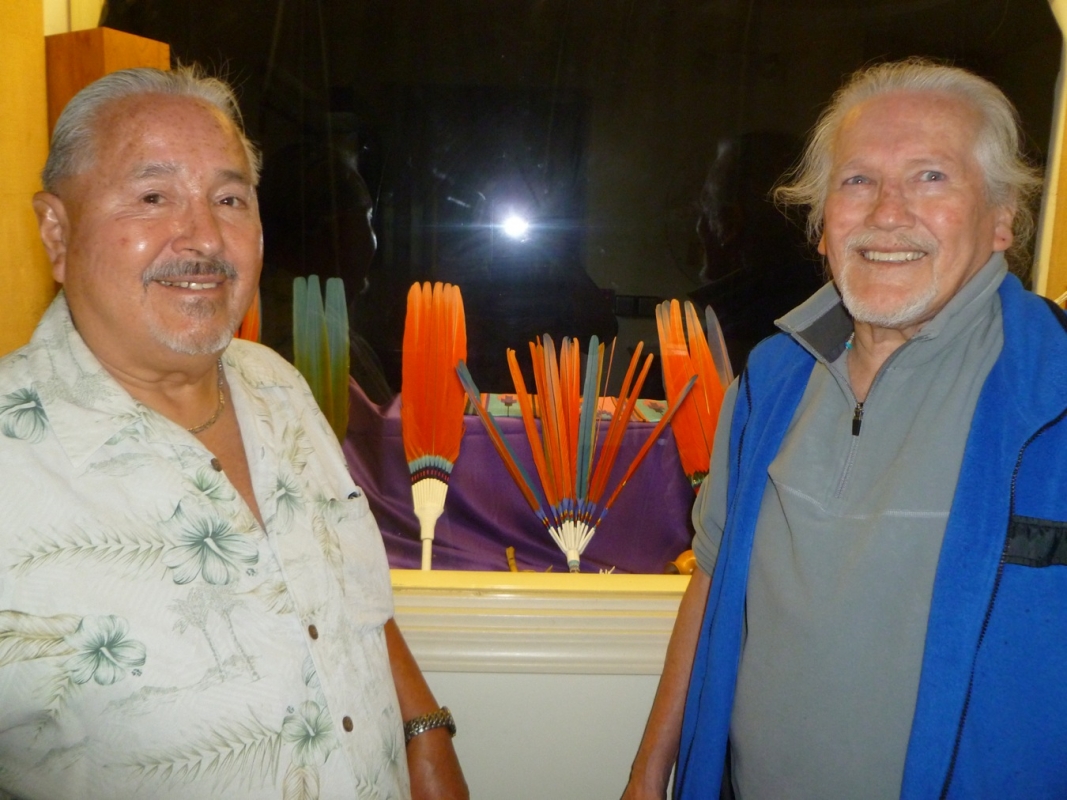 "Ceremonial Feathers for the Tuscarora Native American Church," an exhibit featuring a special collection of sacred Native American fans belonging to Crandall Johnson, will be on display at the Lewiston Public Library during the months of July and August.

Tracy and Crandall Johnson, sons of the late Turtle Clan Chief Tracy Johnson, and members of the Tuscarora Native American Church, carefully arranged about a dozen ceremonial fans, some of which had been crafted by Horace Daukei, a renowned Kiowa medicine man from Oklahoma, in the library's anteroom. These fans are fashioned from what they believe are sacred birds and message carriers for the Creator, and are handed down in peyote ceremonies from the elders to the next generation. Their ultimate hope is to carry on their ceremonial traditions so that their religion will never be lost.

More than merely beautiful display pieces, these works of art have a meaningful purpose, as well. Upon touching the feathers, Crandall believes a radiant spirit works through him and he is able to transmit a healing power upon those he performs the sacred ceremony. Each fan has a story and includes an ancient symbolic tale as well as a song and a dance. Some of the feathers are extremely rare, as they had been traded to the Iroquois hundreds of years ago. They include the feathers of the scarlet macaw, the red tail hawk, the peregrine falcon and the golden eagle.

Crandall carries a special government issued card that gives him permission to have these items in his personal collection - for they include feathers from extinct and endangered species. The handles, individually beaded, are sacred as well, and represent the four basic elements of life: earth, fire, wind and water.

This assortment includes fans made specifically to bring relief from illness through spiritual reawakening. One is the greatest of all and is said to have the ability to create the spiritual atmosphere necessary for healing the most desperate cases. Crandall believes that the healing of all ailments begins with inner peace, which comes only through spiritual healing.

The exhibit, "Ceremonial Feathers for the Tuscarora Native American Church," has been on display at the Native American Museum at the Smithsonian Institution in Washington, D.C., and at the Indian Studies Program at Cornell University. The collection will be available for viewing during regular library hours. Consult the Lewiston Public Library website at www.lewistonpubliclibrary.org for hours of operation.