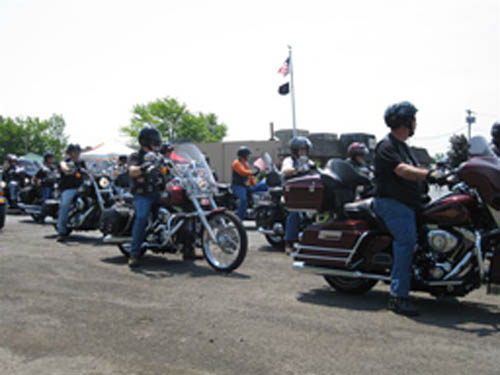 Photo and story by Danny Maerten

Bright sunshine and clear blue skies welcomed 83 bikers in control of their polished machines, many with a passenger, for the second annual Greater Niagara Chapter of American Legion Riders' Dice Run benefit.

By noon on Saturday, June 18, almost twice as many bikes as last year's event embarked on the 75-mile run through Niagara County. Some of the riders were members of American Legion Riders from Wheatfield Post 1451, and from Orchard Park, the Niagara Falls Hog's Chapter, Eagle Riders, Red Knights of Newfane and many other individuals.

Prior to the ride, Bill Cummings, leprechaun, gathered the participants for a blessing, then the engines started and rolled north from the Wheatfield Legion Post on Ward Road in small, spaced groups so as not to impede normal traffic flow.

The ride featured stops at the Lewiston Moose Lodge, the Burt Hotel, Lockport's Dolan Post and the Sikora Post in North Tonawanda.

This year's proceeds will benefit Jammies for GIs, NY7 Chapter of the Blue Star mothers and Niagara Hospice.

The Legion Post was also the drop-off point for donations of new adult clothing, including boxer shorts, T-shirts, athletic socks, sports bras, sportswear and personal items, such as shaving gear, shampoo, deodorant and dental products. The collected items will be delivered at Bethesda Naval Hospital in Maryland, by the Legion Riders on Aug. 12. Items are still being collected at the Legion Post at 6525 Ward Road or by contacting Sam Reeder at [email protected]. Donations also are also being accepted at the Wheatfield Senior Center located at 2790 Church Road in Wheatfield from 8 am to noon on July 29.

The high winner of the Dice Run was Don Lauer and low winner was Kelly Bainbridge. A generous crowd enjoyed an after-ride party, held at the post, with greetings by two of the Buffalo Jills, music by Rip and the Bandogs, hot dogs, door prizes and raffles.