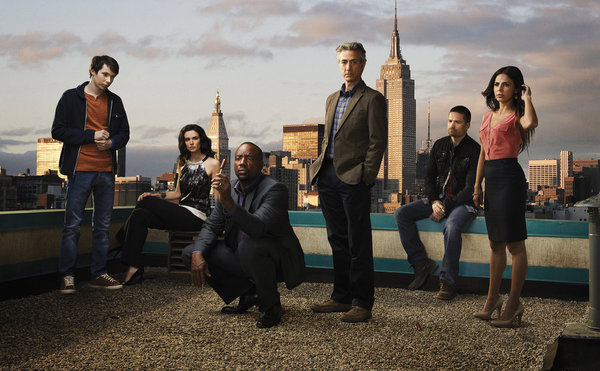 What you need to know: "This is a group of people who are not really your first choice to be an investigative unit or to be going out into the field and getting shot at," says EP Ira Steven Behr. "They are kind of working for the government, but the government doesn't totally know whether to trust them - they don't know whether to trust the government. They're working against this organization of alphas called Red Flag, and Red Flag keeps telling them that they're on the wrong side. And it's a very precarious position to be in."

What if the human mind was capable of producing superhero-like abilities - skills or powers that we've only seen in comic books or at the movies?

"Alphas," like "X-Men" before it, explores that possibility in a smashup of science fiction, action/adventure and real life stories of the unexpected and unorthodox.

"We certainly use neuroscience as a basis for a lot of the jumping-off points for the tales that we tell," says "Alphas" EP Ira Steven Behr. "If you go on YouTube you'll see the most amazing things that people can do

"Growing up, it was always, 'He's a savant; he's a savant.' Now, instead of being a savant, you're an alpha, you know? And maybe the skills are pushed up a little bit beyond the savant scale?"

"Alphas," which was penned by "X-Men: The Last Stand" scribe Zak Penn, is more like "Fringe" than "Superman."

"We don't consider ourselves a superhero show by any means," Behr says. "We're trying to take what's already going on or what can already go on within the human brain and just kind of up it a little bit (with) more extreme science."

That realization, Behr says, is what makes "Alphas" extraordinary.

"I think the fact that the characters themselves are not exactly suited to the position that they're in (is interesting). These are not - as I've said before - these are not your typical heroes, if I dare use that word," he says. "So I think that is really interesting. And I think there is a real honest and true humor to the show, and humor to the situations these people find themselves in. I mean the stories can get extremely dark. Don't get me wrong. They can be dark. They can be violent at times. But we try to remain true to what would ordinary people - how would they react to being in those situations? And there is a lot of humor in extreme situations as protection just to get through them, because people yearn for the normal. And to get them there they will depend at times on their relationships and the humor within those relationships."

That humor is evident with actor Ryan Cartwright (Mr. Nigel Murray on "Bones"), who plays autistic "transducer" (human antenna) Gary Bell. When asked if it's hard to pretend to have special abilities, he says it is - because the crew is jealous.

"I mean, apart from on a technical level - like every now and again when you have to do your certain skill, you know, sometimes the shot is a little bit tricky and everyone has to stop and wait for you to kind of look very serious. But to be honest, it's actually, I think, a lot of the crew are jealous of our powers, because they're like ... they're quite real; it's not that crazy," he says. "So they all, like, at the end of the day you'll just hear them murmuring and wandering off set saying, 'Man, I wish I could just do that. Man, I'd give that guy what for.' And apparently some of the people, they said that their wives are telling them not to do Gary when they're on the telephone. They're like, 'I know; I can tell that your hands are waving in the air and you're trying to open windows while you're talking to me. So just stop it.'

That sense of humor is what attracted Behr to "Alphas" in the first place. He says it's a unique part of the show - and something not always seen in science fiction.

"I've done a lot of genre television, and it's always been a struggle - one that I have kept fighting sometimes when fighting will seem to be the most ridiculous thing to do," he says. "And I wish I would have just stopped fighting, but I was always fighting to try to get humor into the shows. And it wasn't always easy - and sometimes it was impossible. And here was a chance, I mean, like right there on the plate to do honest, real, character-driven humor in a show that had enough other elements in terms of, you know, drama and mythology, that the humor was going to be woven into that fabric in such a way that it could not be pulled out."