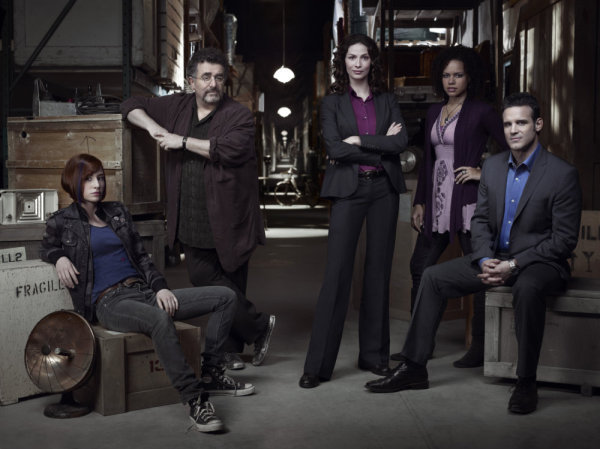 Syfy Powerful Mondays: 'Warehouse 13' 'not pulling the wool over' on fans

What you need to know: "Warehouse 13" follows CIA agents Pete Lattimer and Myka Bering, their boss, Artie, and tech guru Claudia, as they track down historical artifacts embedded with the power of the original owner/creator (i.e. Nikola Tesla's electrical pulse gun).

Season two of "Warehouse 13" ended with an interesting, yet seemingly unpractical cliffhanger.

Joanne Kelly's CIA Agent Myka Bering abruptly quit her job, and left the warehouse and her team behind to sort out the pieces. Myka, you see, was distraught that her trust in H.G. Wells had backfired and subsequently put the world in peril.

Kelly, however, had no such emotional outburst. In this day and age of social media and infinite behind-the-curtain Hollywood shows, fans would've known if the actress had pulled a Charlie Sheen. But she didn't.

So, the question is, if we know Kelly is still with the show, then why did showrunners set this Myka-is-missing storyline in place?

To no one's surprise, the answer lies with actor Saul Rubinek, whose character, Artie, is the warehouse's go-to source of information for Myka and her partner, Agent Pete Lattimer (Eddie McClintock).

"Well, first of all, I got to say, the audience isn't expected to buy into it," Rubinek says. "I mean, the audience is incredibly sophisticated. They would know if we had an actor who is asking for $1 million a episode, or whatever, and wasn't going to be asked back, because word, as you say, would leak out."

But, Rubinek reminds us "(Artie) was killed at the end of the first season," and came back in a new and unexpected manner. So, maybe this whole Myka thing will play out in such a manner?

"The writers create cliffhangers, not so much because you think they're trying to fool you into thinking somebody's left the show or has been killed, or however a cliffhanger is, because you really just want to figure (it) out. The joy of it is figuring out how do you get out of this?"

"The audience is delighted by how you're going to get out of this mess that you just put yourself into," he says. " 'How are you going to do it?' And that's part of the bargain that is struck between the writers and our production and the audience. That's part of the fun of the show."

As an added bonus, Rubinek says, "there are things that happen that are going to (be) surprising, that you are not going to expect ... and that you will go, 'Wow. How did they do that? Why, that's kind of - I haven't seen the series do that before. That's really interesting and new.' And there are surprises in the show - maybe not the ones you'll expect."

What fans do expect, however, is a tight-knit cast that is devoid of "throw-away characters." Though the warehouse is crowded (even more so with the recent addition of Aaron Ashmore's Steve Jinks), each character has meaningful storylines - all of which tie into the greater mythology of the warehouse and its magical artifacts.

"The writers have found a way to (make it work)," McClintock says. "I mean, it's their responsibility as to whether or not a character is going to be a throw-away character, and I don't think (Exec. Producer) Jack (Kenny) would ever let that happen, because each character is import to the show. There's no need to have an extraneous character, and there's no time.

In short, Rubinek says the "Warehouse 13" writers just get it.

"The writers are like - if you got them - they're like 9 years old spiritually on some level. They really love ... doing the show. But they, like - they really have fun with this show," he says. "And because it's operating on a number of levels, the job is to create a fantasy adventure for the whole family. As it turns out, it's a 9 o'clock show; perfect. I mean, it really is a show that the family watches, because there's an aspect of it that, really, a 10- or 11-year-old can get. But then it goes - it gets wittier and there are things that the adults in the room are going to get that the kids aren't going to get, (but) without losing the kids."

Like how a missing character returns just when you least expect it?