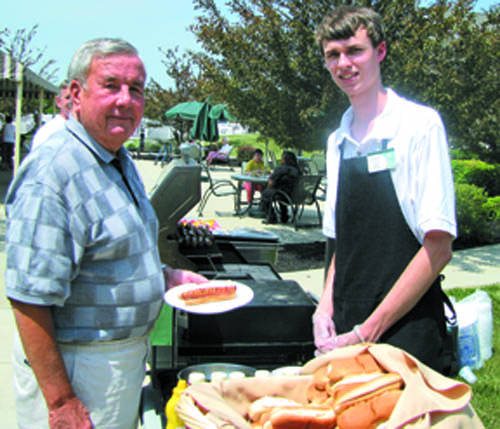 A steady stream of seniors and their family members came to an open house at Crestwood Commons in Wheatfield on Saturday morning.

"A lot of times people drive by and don't realize this community is back here," said Barbara S. Tschamler, executive director of marketing for ElderWood Senior Care of the attractive independent living patio homes and apartment building located off Niagara Falls Boulevard.

Some people assume Crestwood is just a nursing home, but the independent living senior housing community actually has been in place for almost four years, Tschamler said. In October, ElderWood will add an assisted living facility at Crestwood, which will serve seniors who are still active, don't need constant nursing care, but may need help with some activities of daily living, she said. Connected to the nursing home, it will be able to accommodate 60 people in 28 private rooms and 16 semi-private rooms.

Independent living, assisted living and skilled nursing - "It's all here," she said, noting that in the case of married couples where one might need a different level of care, such as in the case of Alzheimer's, both could live in the same community.

Those touring the Crestwood Commons independent living homes and apartments were treated to hot dogs and lemonade in the apartment center courtyard and had a chance to talk with current residents.

"Like it? I love it," said apartment dweller Anna Bolea. "It's like family. Everybody helps each other."

Also on hand for the open house was Kerry Donnelly, assistant manager of driver training for AAA Western and Central New York. She was giving seniors a sampling of AAA's "Roadwise Review," which can be downloaded at AAA.com or purchased for $3 at AAA's offices. Senior in-car evaluations also can be done for families unsure about their senior's ability to drive, she said.

"People make assumptions that at a certain age people need to hang up the keys," she said. "Age is not a predictor of driving ability. It's medical conditions a lot of time that affect our ability to drive."