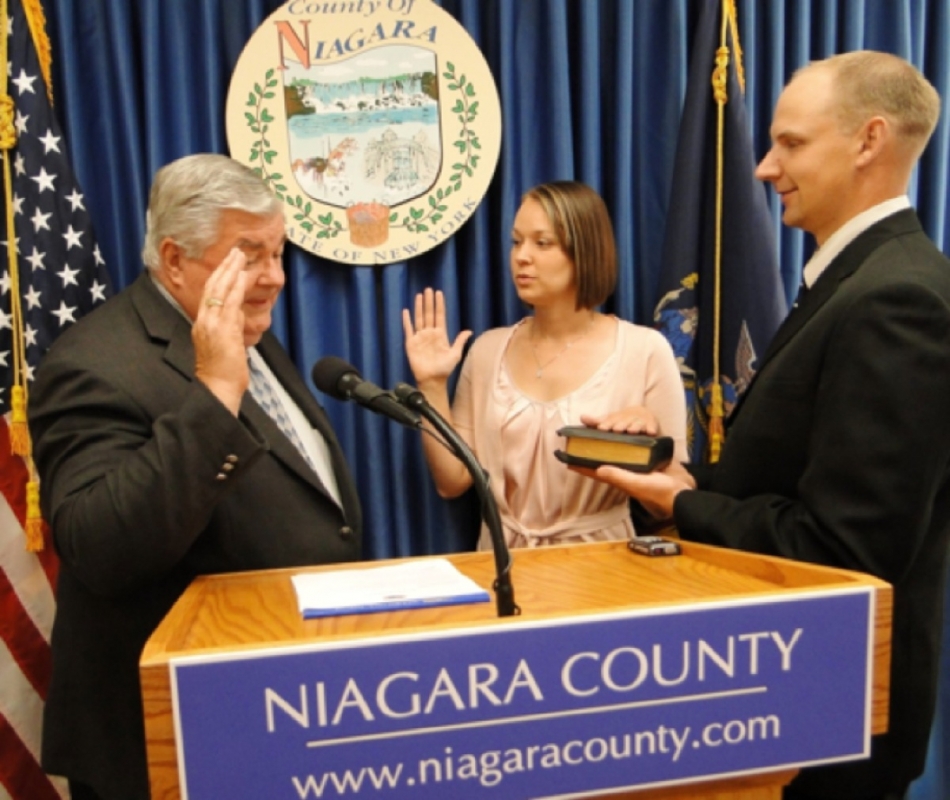 New Niagara County Legislator Cheree J. Copelin, R-LaSalle, is sworn in by Niagara County Clerk Wayne F. Jagow Tuesday in Lockport, while her husband, Luke, holds the Bible. Copelin, who is filling the remainder of former Legislator Vincent M. Sandonato's term, immediately was seated as a legislator. Sandonato's resignation from the Legislature became official Monday, although a local law initially introduced by the former lawmaker to curb protests at funerals advanced in the Legislature Tuesday.

Copelin sworn in as county lawmaker

The Niagara County Legislature filled a seat vacated by the resignation of popular freshman lawmaker Vincent Sandonato Tuesday night, overwhelmingly approving the nomination of Cheree J. Copelin to fill out Sandonato's term representing the LaSalle-based district in the County Legislature.

Copelin, a teacher who resides on Cayuga Island, was selected during Saturday interviews of several individuals that had expressed interest in the seat, including announced Democratic candidate John Briglio.

She was approved by a 14-2 vote, garnering the support of all the members of the Legislature's Republican-led majority caucus, as well as two of the chamber's four Democrats. Democrats Dennis Virtuoso and Renae Kimble were the sole backers of Briglio. Two members were absent.

Copelin was sworn in by County Clerk Wayne F. Jagow, with her husband, Luke, looking on.

"It's an honor to be selected to serve my neighbors in LaSalle," Copelin said. "It is my goal to ensure that LaSalle continues to have a strong voice in decisions about how county dollars are spent, and a seat at the table where those decisions are made."