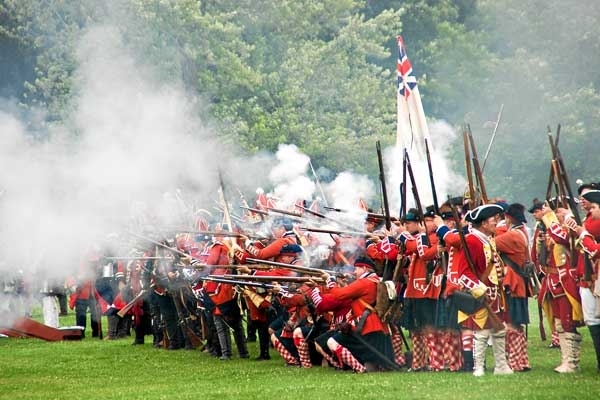 Largest event of the year will take place July 1-3

Hundreds of re-enactors are polishing muskets and brushing off uniforms as Old Fort Niagara prepares for its 32nd annual French and Indian War Encampment set for Friday, July 1, through Sunday, July 3. This year's event offers six large-scale battle re-enactments and a variety of other public programs, including artillery and musket firings, historical drama, a Native American lacrosse game and plenty of interactive activities for the whole family.

Large encampments of 18th century French and British soldiers, Native American warriors, and period artisans will fill the historic fort and its environs for the three-day event. Visitors will meet soldiers, surgeons, fur traders, musicians and wilderness diplomats, as life on the 18th century Niagara frontier is brought to life.

The event kicks-off on Friday morning with an impressive display of 18th century pageantry as soldiers "troop the colors" just outside the fort's walls. Shortly thereafter, the opposing forces do battle - the first of six such battle re-enactments that fill the weekend schedule. By Sunday afternoon, French forces, battered by several days of British assault, will surrender the fort.

In July 1759, British soldiers, New York troops and Iroquois allies laid siege to Fort Niagara. After holding out for 19 days, French forces were finally compelled to surrender the fort.

Old Fort Niagara has hosted an annual re-enactment of the historic siege since 1979. Over the years, the encampment has grown to become the largest annual event of its kind in North America. "Each year we add new features," said Robert Emerson, the fort's executive director. "There's something new and different every year."

Admission for the event is $13 per person. Tickets are available at the door.

For more information, call the fort at 745-7611 or visit www.oldfortniagara.org.

Old Fort Niagara is a National Historic Landmark and state historic site operated by the Old Fort Niagara Association, a not-for-profit organization, in cooperation with the New York State Office of Parks, Recreation and Historic Preservation. Located on Lake Ontario in Youngstown and 14 miles north of Niagara Falls, Old Fort Niagara has stood at the entrance to the Niagara River since 1726, and today features the "French Castle," the oldest building on the Great Lakes. OFN offers a unique collection of original military architecture and fortifications from the 18th and 19th centuries in addition to living history events and education programs.

Welcoming more than 80,000 visitors a year, the fort opens at 9 a.m. daily year round. Information, including hours of operation, can be found at www.oldfortniagara.org or by calling 716-745-7611.