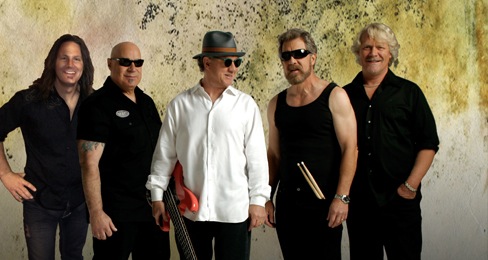 Lots of fans, lots of hit songs when CCR comes to town

When it comes to Creedence Clearwater Revival, it's hard to say which numbers are more impressive: the band's 12 Billboard Top 10 singles amassed over a three-year span, or its four generations of fans over a 44-year (and counting) career.

One thing's for sure: When original band members Doug "Cosmo" Clifford (drums) and Stu Cook (bass) bring Creedence Clearwater Revisited to Artpark tomorrow, there will be a lot of hit songs performed for a lot of fans of all ages.

"(It's) Creedence all night long," Clifford said of the band's live show. "Many, many hits. We're really fortunate and blessed to have the legacy that we have, and just the fact that we have so many fans - and that that fan base is growing - I think is probably the most remarkable thing about our career, really.

"The test of time is the ultimate test in the pop medium, and now I see a fourth generation emerging. It's humbling; it's an awesome thing to have, and a gift. It's really a gift."

Clifford said crowds are somewhat segmented, with older fans on one side and newer fans on another. Regardless of who's where, seeing both old fans and new fans enjoy the music is exciting for Creedence Clearwater Revisited.

"The younger kids are having the experience of the music live for the first time," he said. "And so, whatever is happening in their lives at that time, those memories will be indelible, really, for the rest of their lives.

"It's like the people in our generation - I would have to say the grandpas and grandmas, at this point in time - they remember what was going on back in the '60s, and it conjures up those memories and those feelings, and that's a unique thing, too."

The latter hit sums up the band in two words. CCR travels. A lot. Before heading to Lewiston, the band was in the midst of seven shows in nine days.

Having been on the road for six decades, Clifford really could do without the bus rides.

"I enjoy playing," he said. "I play for free; I get paid to travel. The hard part is the traveling, but it's a necessary evil. (Laughs) You gotta' get there!"

Of course, once on stage, "I still get an adrenaline rush every show - no matter how big or how small," Clifford said.

Plus, he noted, "When you have a gift like that, you have to share it. And that's why we come out here and all over the world, really, and play the music."

Once in town, CCR doesn't have a ton of time to see the sights. But, prior to last summer's Artpark performance, the band ate at Water Street Landing in Lewiston. CCR also has seen Niagara Falls and its wonder of the world.

"When we have the opportunity, we like to get out," Clifford said.

"We've played in the area - both sides of the falls," he said. "It's always an interesting place. It's an amazing landmark, for sure."

Band members previously rode the Maid of the Mist and toured the Cave of the Winds.

"Those are the things that you want to experience. I know a lot of guys (who say), 'Ah, I don't want to go out and do that.' But it's kind of a unique spot on the planet. It was pretty exciting," Clifford said. "So, it's always fun to play in a place like that, because you know the power of the falls - you can feel it, actually. There's definitely energy."

Regardless of the venue, "We have fun. Every night. Wherever we are," Clifford said. "That's the whole point of what we do. If we're not having fun, then the audience isn't going to be having fun. We need each other."

Clifford could also use some votes. Though he said "I'm certainly not worthy," the drummer is nominated for inclusion in Classic Drummer Magazine's Classic Drummer Hall of Fame. For more information, or to vote, click the link on CCR's website, http://www.creedence-revisited.com/.

"It's certainly an honor, and a very humbling thing," Clifford said of the nomination. "It's about styles and the impact you have as a drummer."

"Tuesday in the Park" begins at 6:30 p.m. Bruce Wojick is the opening act. For more details, visit www.artpark.net.