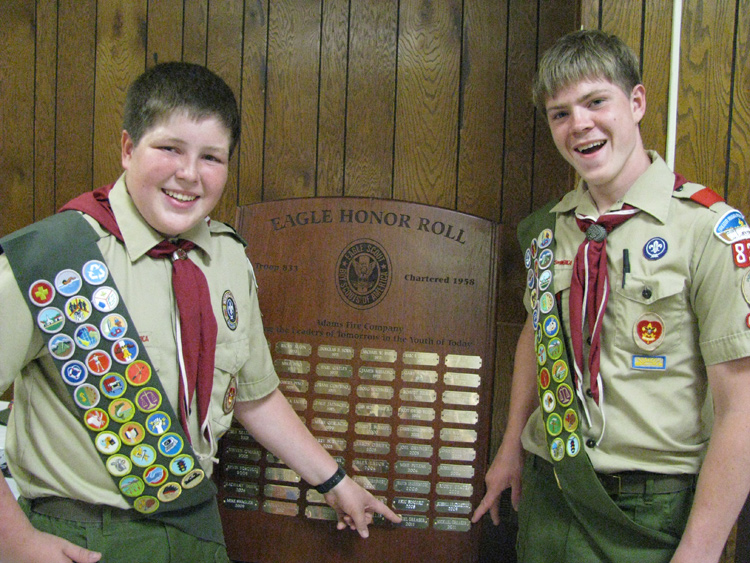 "There's no better young man in this great land,

Than an Eagle Scout with a helping hand" ... Boy Scouts of America

Boy Scout Troop 833 has held numerous Court of Honor ceremonies in its history, but this month, two brothers joined the coveted Eagle Scout ranks together.

Michael J. and Daniel J. Greaser of the Town of Lewiston were installed as Eagle Scouts, the highest rank in Boy Scouting, on June 7 at Adams Volunteer Fire Co. in Wheatfield, which sponsors their troop.

To become an Eagle Scout, boys must progress through the ranks, earn 21 merit badges, serve six months in a troop leadership position, take part in a Scoutmaster conference, and plan, develop and lead a major service project.

Michael, 15, a sophomore at Niagara-Wheatfield High School, earned 31 badges. His service project was to lead a team of volunteers in refurbishing 29 picnic tables and benches around Don Miller Park on the Erie Canal in Tonawanda. Some of the benches and tables were rotting and all were in desperate need of scraping and painting, he said.

Daniel, 13, an eighth-grader at Edward Town Middle School, earned 30 badges. His service project was to lead a team of volunteers to repair the flower beds at the Niagara County SPCA on Lockport Road in Wheatfield. The blocks were falling down and the shrubs were overgrown. This imposed a safety hazard to visitors and employees, he said.

Nationally, the average age for boys becoming Eagle Scouts is 17. Daniel said his brother "really pushed me to earn my merit badges early. That's why I'm really so young getting it."

"Being an Eagle Scout, you can have respect from those who don't know you yet," said Michael, pointing out that part of the Scout law is to be trustworthy.

Scoutmaster Bill Kerns said Troop 833 already had one Eagle Scout this year before the Greaser brothers (Chad Willis, 18, of Tonawanda) and expects to have one or two more before the year ends. The secret to the troop's success, he said is the type of program they run and the support received from families.

"We're a boy-led troop," he said, explaining that the boys set the theme and run the meetings; he's just there to give guidance. "I don't interfere with them running their meeting unless they ask. Boy Scouts trains boys to be leaders."

Michael said he joined Scouts in 2004, at first because his parents wanted him to, but then discovered he liked it.

"It's almost like a big family," he said as he and his brother confidently handled the duty of welcoming guests to the Court of Honor celebration.

In his Court of Honor program, Michael, who plans to go to college to become a chemical engineer, said: "I think all kids should be involved in Scouting because it gives you skills which you can use in your day-to-day activities. It also makes you think about others in your community and how you can help them. This helps make the world a better place for all of us."

"When I first joined Scouting, I didn't know how to handle situations very well. Now I am much braver and know how to problem-solve," Daniel said. "Because Boy Scouts has given me a lot of happy moments, I would like to give other people a reason to smile. That's a big reason why my goal is to become an orthodontist."

For more information on the troop, go to the website at troop833.org.