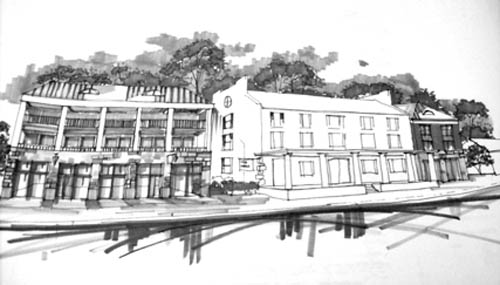 A Frontier House redesign sketch, circa 2007. (courtesy of EI Team)

New Frontier House proposal to be presented at Planning Board meeting

Developer Richard Hastings, attorney John Bartolomei and EI Team President Hormoz Mansouri, the principals behind the historic Frontier House building on Center Street, are expected to present a new proposal to the Village of Lewiston Planning Board on Monday, June 13. Village officials have recently met with the building's owners, and expect to receive a plan that is similar to the one presented to trustees in the first quarter of 2008.

Back then Hastings and EI Team architect Timothy E. Kupinski presented a plan to build 27 condominium units in an L-shape surrounding the Frontier House. As reported then, the west side of the Frontier House would be connected via a bridge to a new, 31-foot, brick and stone building. That four-story structure wraps (south to east) to Ridge Street, where it connects to the 50-foot complex. On the Center Street side's ground floor, there would be a retail store or small eateries.

In March 2008, the village's Zoning Board of Appeals granted the project four variances, which paved the way for the Planning Board and Village Board to approve the proposal.

However, progress was delayed when fellow Lewiston developer Herbert Richardson and PSR Press Limited filed an Article 78 lawsuit against the village and Hastings in the summer of 2008. The complainants challenged the validity of the variances and alleged the project was improperly rushed through the environmental review process.

State Supreme Court Justice Richard C. Kloch Sr. dismissed the case in October 2009, but the building hasn't been touched since then - save some repairs by Hastings. Lewiston leaders attempted to persuade Niagara County Community College to use the Frontier House for its culinary institute, but to no avail.

The new proposal is expected to include siding and aesthetic changes to the condo complex that would more closely resemble the Frontier House.

While nothing has been approved since 2008, the EI Team website writes this of the project:

"E.I. Team assisted in coordinating the restoration of the Historic Frontier House in Lewiston, New York with the intent of it becoming a Board & Breakfast, similar to its original use.  460 Center Street is the location of the Historic Frontier House. The intent of the project is to develop the adjacent lands: 458 Center Street and 445 Ridge Street. Presently, these parcels are a bituminous parking lot once utilized by a fast food restaurant that was housed in the Frontier House. 458 Center Street, adjacent to the Frontier House, will be identified as 2,400 square feet of retail/commercial space while 445 Ridge Street will be a residential component consisting of 27 housing units. The final arrangement will be of retail fronting Center Street on the ground floor with two levels of balconied residential units above. An "L" shape building configuration will utilized with parking on the ground level and residential apartments on the first, second and penthouse floors above.

"The plot of land fronts 198.0 feet on both Center and Ridge Streets and has a depth of 198.0 feet, creating a total site of 39,204 square feet or 0.9 acre. The Frontier House has a foot print of 3,935 square feet while the new construction will have a foot print of 14,764 square feet, additional paving and sidewalks will consist of 21,515 square feet. The remaining lands will be developed for green space. The 8,834 Square feet of green space is an increase of 4.4 % over the present use.

"The facade treatments will reference the vernacular materials used in the Village of Lewiston such as stone, decorative wood trim and clapboard as well as board and batten. The color selections will lend themselves to the historical community in which the construction will be set."

In 2008, the project cost was around $13 million. With three more years of inactivity, and numerous repairs required (so says village officials), that number is expected to be considerably higher.

The Frontier House has been closed since former tenant McDonald's pulled out in late 2004.

The Planning Board meets at 6:30 p.m. in the Red Brick Municipal Building (North Fourth and Ridge streets).