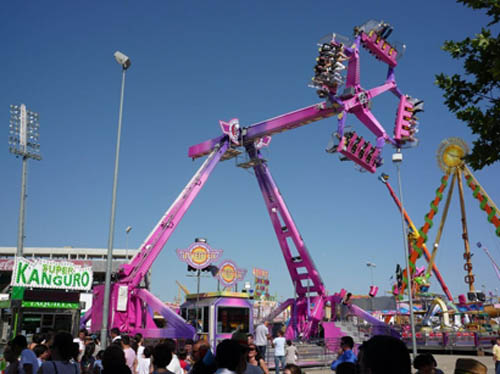 In celebration of Fantasy Island's 50th year, Martin's Fantasy Island on Grand Island opens a brand-new thrill ride on Memorial Day weekend. Called the "Mind Warp," the ride is the first of its kind in North America, and one of only five in the world.

On the "Mind Warp" 16 riders are seated around the bottom end of a tall arm, which acts as a pendulum, swinging them higher and higher until they swing completely over the top, nearly 100 feet in the air. While swinging, their seats also rotate around the end of the arm and tumble 360 degrees, head-over-heels.

"We think this new thrill ride will be very popular with older kids and adults," said Martin DiPietro, the park's owner. "Guests will have to be at least 50 inches tall to ride it, but we also have lots of rides that adults and kids can ride together, and several more for the little ones."

He adds another new ride at the park for 2011 will actually be a "blast from the past." This weekend will see the opening of an all-new, updated version of The Devil's Hole - one of the most popular rides from Fantasy Island's past.

The park traces its beginnings to 1961, when the idea of a theme park was new to Western New York. A group of investors built and opened Fantasy Island, billing it as an amusement park for small children.

In 2011, 17 years after it became "Martin's Fantasy Island," the park is a Western New York institution that caters to all ages and offers a family-friendly atmosphere.