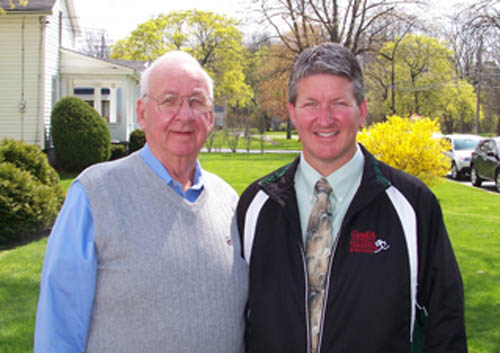 Left to right, Paul Beatty Sr. and Paul Beatty Jr., recognized as Town of Porter Citizens of the Year.

The Niagara River Region Chamber of Commerce will honor nine businesses and individuals at its annual Chamber Awards Gala, beginning at 5:30 p.m. Saturday, June 4, at the Niagara Falls Country Club in Lewiston.

The evening is one of the chamber's highlights of the year. It's held to celebrate the business community and those citizens who help contribute to the success of the region.

In this week's Sentinel, we continue our profiles.

Paul Beatty Sr. and Paul Beatty Jr. have been chosen the Town of Porter Supervisor Merton Wiepert as recipients of the 2011 Town of Porter Citizen of the Year award. Both Paul Sr. and Paul Jr. (chairman) are active volunteers in raising money to support Hospice through programs such as the Hospice Dash Half Marathon and 5K Run/Walk and the Jack Beatty Hospice Memorial Regatta, Niagara River Cruise and Clambake.

The Jack Beatty Niagara Hospice Regatta has raised more than $232,000 over the past 12 years. Paul Beatty Jr. serves as general chairman of the committees, comprised of his father and mother, aunts and uncles, his wife Joanne, his children, and 25 other local volunteers. The event has 25 other local volunteers. The event has grown from a modest fundraising activity to Niagara Hospice's largest independent fundraiser. This year's event will take place on July 8 and 9 at the Youngstown Yacht Club and is open to the general public.

There is a great deal of excitement about this year's Hospice Dash. The event has been scheduled for Sept. 24 and will feature a brand-new half-marathon course beginning at Artpark in Lewiston and ending at Porter on the Lake Park in Youngstown. There will be a pre-race party at Artpark and live entertainment along the entire route including Zach Ward, The Junk Yard Dogs, and Soul Committee, to name just a few. Athletes will be inspired by the natural beauty of the lower Niagara Region and the many historic sites they will experience during their stay. The event is expected to attract thousands of athletes and they invite the entire community to come out and cheer on the runners and join in the fun.

Proceeds from these great programs help to support and make a difference in the lives of Hospice patients, their families and in the community.  The much-needed revenue provides Niagara Hospice with the ability to further their work with individuals and families dealing with end of life illnesses.  Niagara Hospice provides service to more than 1,300 Niagara County families each year where no individual is denied Hospice care, regardless of their ability to pay.

As noted, The Jack Beatty 2011 Niagara River Cruise, Clambake and Regatta will take place on July 8 and 9, and the Hospice Dash is scheduled for Sept. 24 starting in the Village of Lewiston and ending at Porter on the Lake Park. Paul Sr. and Paul Jr. and their committees will continue to strive to raise money and recognition for Niagara Hospice throughout the entire year.

The Town of Porter and the Niagara River Region Chamber of Commerce are grateful for the work of Paul Beatty Sr. and Paul Beatty Jr. and are proud to honor them as the 2011 Town of Porter Citizens of the Year. For additional information or to register, you can visit them online atwww.NiagaraHospiceRegatta.com and/or www.HospiceDash.com or contact Paul Beatty Jr. at 998-5777.