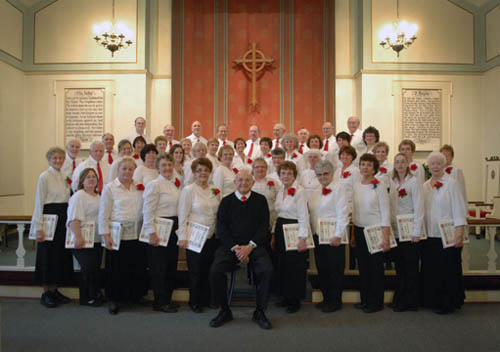 The Lewiston Choraleers, in advance of an appearance at Disney World in Orlando, Fla., will provide the local community with a preview of the group's fall performance there at three concerts scheduled for June 4 and 5.

The 55-member group, under the direction of Donald D. Shrimpton, will perform Saturday, June 4, at 2 and 7 p.m. at First Presbyterian Church, Fifth and Cayuga streets, and Sunday, June 5, at 2 p.m. at Messiah Lutheran Church, 915 Oneida St.  The popular chorus' fifth annual spring concert will include familiar music from Broadway shows and Disney productions, plus songs by contemporary performers such as Michael Jackson and the Beatles.

The family-friendly concerts are open to the public, with a general admission fee of $5. Children under 12 are free.

The Choraleers have been presenting seasonal concerts at Christmas and Easter and in the spring and summer in the Niagara Falls-Lewiston area since being formed in 2007. The group has been invited to perform at Disney World in October.