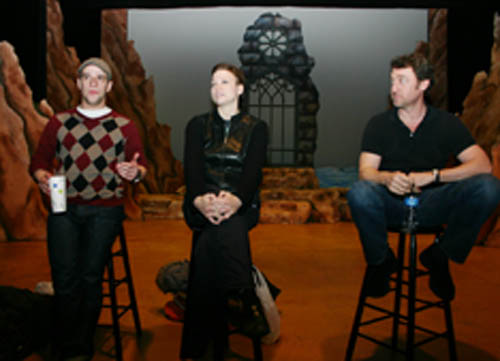 Pictured from left are Ryan Kasprzak, the "Billy Elliot" dance captain and a popular former contestant on FOX's "So You Think You Can Dance"; Armand Schultz, a 1981 graduate of Niagara University, who plays the Dad in "Billy Elliot"; and Sarah Brians, choreographer of "Billy Elliot."

Stars of 'Billy Elliot: The Musical' dance into Niagara University

Armand Schultz, a 1981 graduate of Niagara University playing the role of the dad in the touring production of "Billy Elliot: The Musical," returned to his alma mater on Monday with Ryan Kasprzak, the show's dance captain and a popular former contestant on FOX's "So You Think You Can Dance" television series. The duo attended theater classes before holding an afternoon question-and-answer session with students during their day off from the 10-time Tony Award-winning musical, which is on tour in Toronto through Sept. 3.

Schultz has starred in several Broadway productions, including "Frost/Nixon," "The Herbal Bed," "A View From the Bridge" and "The Secret Rapture." His film credits include blockbusters such as "SALT," "Burn After Reading," "The Happening" and "Vanilla Sky." He has also appeared on television in shows such as "The Chicago Code," "Life on Mars," "Gossip Girl," "The Practice," "Third Watch" and "Law & Order: SVU."

Along with his appearance on "So You Think You Can Dance" with his brother, Evan, Kasprzak was nominated for a New York Innovative Theater Award for Outstanding Choreography for his work on the international tour of "Fosse." He is currently creating new work with Parallel Exit: Physical Comedy Theater, including "Cut to the Chase," a Drama Desk Award nominee.

To learn more about "Billy Elliot: The Musical," visit www.billyelliotintoronto.com.

For more on Niagara University's theater program, go to www.niagara.edu/theatre-fine-arts.