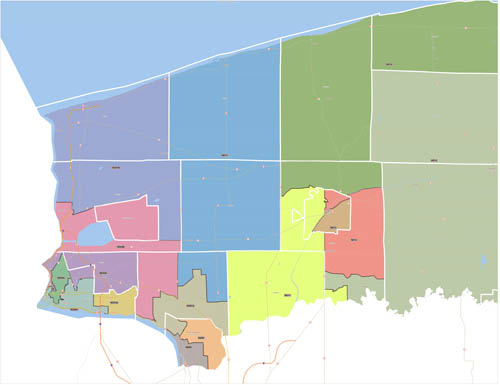 The county's non-partisan, citizen-run Reappointment Commission approved the 15 legislative districts in their latest format Wednesday night and forwarded the proposed districts to the County Legislature, which is expected to address the matter further at its Tuesday session in Lockport.

The new map reflects changes triggered by the 2010 census and draws the current 19-member Legislature down to 15 seats, based on a voter-approved downsizing referendum passed in 2009 with the support of 83 percent of county voters.

A noticeable change in the revised map is seen in the district labeled as "ND02B" which covers the Town of Lewiston (shown in pink), now held by Legislator Richard Soluri, who was appointed earlier this year to fill the vacancy created by the election of John Ceretto to the State Assembly. That district as seen in the latest map would expand southeast into Wheatfield, encompassing portions of a district now held by longtime Legislator William R. Ross, who also serves as legislature chair. It would conceivably pit Soluri versus Ross for control of the district.

Soluri, while a new face on the county level, also has deep roots in local government, having served as mayor of the Village of Lewiston for more than 15 years until he retired in 2009. He is credited with spearheading many of the improvements the village has experienced during the 1990s and early 2000s. Beyond his role with the legislature, he remains active in community discussions concerning the future of the Robert Moses Parkway.

Ross said this week he would be discussing the potential impact of the redistricting with Soluri.

Other significant changes with the new maps are:

•The proposed Town of Porter district, referred to as "ND01B," which expands from its earlier northern boundary with the Town of Lewiston to the southeast. It would border the Tuscarora Indian Reservation on the east and end on at a southern point just west of Niagara County Community College.

•The Wilson-Cambria district, referred to as "ND10," which expands from its border at Lake Ontario on the north to include Cambria and extend south to the Sanborn area just north of Wheatfield.

The Legislature will likely vote on the proposed district map at its April 19 meeting. Any vote will only be either to approve or reject the maps, which cannot be altered by the Legislature, a step county lawmakers took to prevent the influence of politics on its citizen-led redistricting process.

The commission has been meeting since January, and contracted the services of attorney J.R. Drexelius, who served as a consultant to help draw districts that protected equal representation while complying with various federal laws, including the Voting Rights Act of 1965.

The proposed maps and supporting materials can be viewed online here or via www.niagaracounty.com.