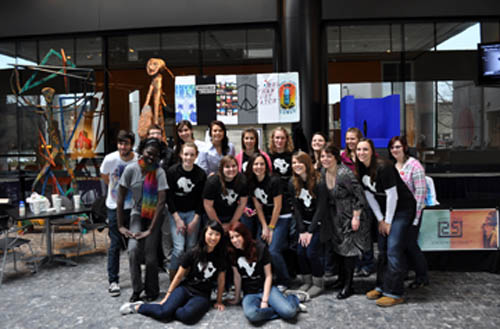 Members of Niagara University's Invisible Children chapter pose for a photo with the organization's East Coast "roadies." (photo by Sarah Kim, Class of 2011)

More than 60 people assembled at Niagara University's Castellani Art Museum on March 11 or a mid-day screening of a new documentary by a non-profit activist group that endeavors to raise awareness and funds for children forced into slavery as child soldiers. "Tony," the latest effort by Invisible Children, follows the life of a young Ugandan who is fighting to stop other boys from being forced into becoming child soldiers.

Sponsored by NU's Office of Campus Ministry, the free, public event featured a viewing of the film as well as brief addresses by speakers affiliated with Invisible Children, most notably Oroma "Nancy" Knox, a native Ugandan.

In 2002, Knox and her family were ambushed on their way home by the Lord's Resistance Army (LRA), a rebel group that has been responsible for the abduction of more than 30,000 children in northern Uganda, the Democratic Republic of Congo, Sudan and the Central African Republic since 1986. Prior to escaping, Knox and her family were forced to sleep alongside the road in the cold without food, and witnessed "numerous discarded dead civilians" during their journey.

"It was terrifying," she said.

Knox is now part of Invisible Children's movement to "use film, creativity and social action to end the use of child soldiers in Joseph Kony's rebel war and restore LRA-affected communities in central Africa to peace and prosperity."

For the past 25 years, the LRA and the government of Uganda have been waging a war that has seen more than 100,000 civilians killed and 30,000 children abducted. However, in 2006, Kony and most of the LRA left Uganda to advance their "spiritual movement" across the Congo, the Central African Republic, and Southern Sudan. It is estimated that more than 90 percent of the LRA's army consists of child abductees.

The purpose of the Invisible Children tour is to reach high school and college students across the country. The organization fields 17 teams of "roadies," groups of proponents that travel the U.S. dispensing Invisible Children's message.

"Our goal is to expand awareness of this devastating, widely neglected human emergency," said Austin Estes, a member of Invisible Children's East Coast team, which followed up its stop on Monteagle Ridge with trips to Buffalo Seminary, Eastern Hills Church and Buffalo State College.

Elizabeth O., a project coordinator in Niagara University's Border Community SERVICE Program, was stationed in Uganda as a United States Peace Corps volunteer from 2007-09. During her time there, she taught courses at Kisubi Brothers University College while experiencing what it was like to live in poverty without running water and electricity. Surprisingly, it was her ability to relate to the natives that nearly dissuaded her from attending the presentation.

"I hesitate to attend these types of things, because they highlight the not-so-nice stories when there are many positive ones to be told," she said. "However, looking at it from another perspective, I certainly do understand the importance of bringing attention to this cause."

Elizabeth elaborated specifically on a scene in the movie where "Julie" mentions that while she and her fellow Northern Ugandans are thankful for receiving items such as clothing and shoes from the Western world, it may fundamentally inhibit their capacity to achieve true independence.

"That is one of the reasons that I was so proud of the time that I spent there; we were educating the natives in hopes that we could build a foundation for them to achieve a more self-sustaining way of life," Elizabeth commented.

For now, Invisible Children will continue traveling the globe, seeking to build awareness for the tragedies in Africa one stop at a time.

"Right now as I talk, the same thing that happened to me is happening to the people of the Congo," Knox reiterated. "But no matter what happened to me, I never gave up on myself or my future. My life is great proof that peace is worth fighting for and this is why I've chosen to travel all over to ask you to help us."

Niagara University has an active Invisible Children chapter on campus. Participating students support the cause through bake sales, gift-wrapping fundraisers and Chinese auctions. The group also regularly holds screenings of the first Invisible Children documentary, "Invisible Children: Rough Cut," which was released in 2003. The film was originally shown to friends and family, but has now been seen by millions of people.

Additional information on Invisible Children can be found at www.invisiblechildren.com.