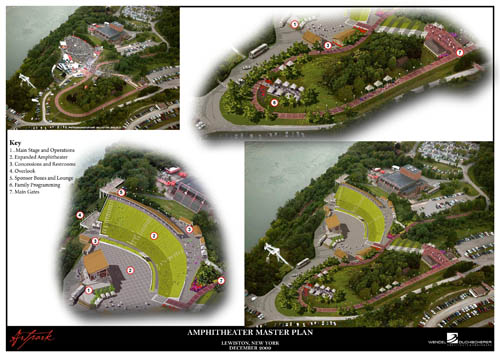 A composite drawing of the proposed changes to the Artpark Outdoor Amphitheater. (Rendering by Wendel Duchscherer Architects and Engineers)

Proposals to modernize Artpark's outdoor amphitheater were muted by a handful of residents who say the performing arts venue is more trouble than it's worth.

Though Artpark & Company representatives were intent on explaining the benefits of upgrading and reconfiguring the performance "bowl" and support facilities, local citizens turned a public hearing into a forum on what they consider lacking at the Lewiston landmark.

As part of this week's meeting on the draft environmental impact statement - the next step in Artpark's expansion process - activists Bob Giannetti and Claudia Marasco and residents Al Soluri and Heather DeCastro told members of the New York State Office of Parks, Recreation and Historic Preservation that the venue is too loud, its patrons are too unruly, and the music selection leaves a lot to be desired.

Giannetti, who operates Bob's Olde Books on Center Street, painted a picture of a summer night where, to his chagrin, he'd be caught between a "wall of people" outside, walking to or from a concert in the park, and "unwanted sound" inside his home.

"That is simply unacceptable," he said.

With regard to the noise levels, Giannetti said, "It is unbearable, and it's unnecessary. And we're talking about making all sorts of improvements when all you have to do is turn down the volume and keep it there. That's it. That's all you need to do."

Soluri, likewise, said the music is too loud.

"It started off not bad (last year), but by the end of the summer that noise was much higher than it has been in the past five years," he said.

"This is a major concern with the residents that every Tuesday night they'd be interfered with in their homes with the volume of music coming out of Artpark," he added.

What's more, Giannetti said, is "Many residents of the village see fit to have people park on their lawns - perhaps charging; perhaps not. That is a real issue. That must be addressed, either by our village fathers in their wisdom, or by you. Or by anyone. It simply is not in keeping with the aesthetic of a dignified community."

Giannetti questioned the amphitheater's safety, when, according to his count, "there are 14 police officers from various agencies who are really monitoring a 20,000-person crowd. That's unacceptable. Furthermore, it's unacceptable because if we increase that number I don't want to have to pay for it through my village taxes."

He also took aim at Artpark & Company President George Osborne, who works with booking agents to schedule the popular "Tuesday in the Park" concert series.

"I think since we have had Mr. Osborne's rock concerts, I think we have gone from what was a good mix of fine arts and mainstream arts," he said. "There is no emphasis on arts at Artpark. It really has become 'Rockpark.' "

DeCastro, who said she encounters folding-chair-swinging concertgoers, suggested more be done to control the crowds.

"I think it's wonderful that you're trying to make Artpark the place that I remember in my childhood as a wonderful place to go. However, if you're going to invite this many people to the venue, I think there has to be constant monitoring and vigilance in terms of controlling the crowds - from the neighborhoods; from the homes that we live in. And we can't just get lip service."

Marasco suggested more could also be done for children.

"We have lots of kids in Lewiston that seem to have not too much to do. We have some vandalism, obviously. We don't have a swimming pool - we don't have anything - and we have this gorgeous park sitting there all year long."

"That's why we hold public meetings, so people can come and ask questions and look at the designs - essentially," he commented.

"All those kinds of things are built into this design to make it a more enjoyable evening experience for people to come out and enjoy the park and the concert series," Thomas added. "But also it also opens up the possibility for Artpark to do other programming, which they just can't do at the venue now."

"That's kind of the irony of it, is this new facility - it won't be bigger," he said. "We think it will be better. We think it will control a lot of the things that folks have taken issue with - and deservedly so. So, hopefully when we have everything in place, and the finances in place, and the environmental things have been addressed, most of these concerns will be mitigated."

Brown said the Artpark staff would work harder to ensure residents are fully aware of what the expansion proposal calls for - and that it's not just an excuse to book bigger concerts. He suggested the renovation would alleviate a lot of concerns.

"It is a challenge, because the Tuesday nights, obviously, have been the mechanism that helps fund the rest of the mission that we're trying to accomplish," he said. "You know, with decreased state funding - with decreased funding in general, with sponsorships - it becomes a challenge. So, the Tuesdays have been a spot that's helped us fund other programming.

"And this, really, we have to start talking a little more (about) what else is happening with this project, because it is a significant improvement to the children and family service area. It will also allow us to control crowds better. And it will allow us to use the amphitheater for things other than just rock concerts.

"We need to do a better job marketing that and telling people that. But, we've been focused on trying to get this thing developed - to a point where it's doable and everybody can sign off on it as something that's welcome.

"And I think just on the safety and the health issues ... and the flow, not only of vehicle traffic, but foot traffic (too), and just the general experience, it's a necessary thing."

In terms of offering something for everyone, Osborne said, "We do have diverse programming."

"We have a lot of children's programs going on there. We've adding more each year. ... (There's) a lot more programs, in numbers of programs, for things other than rock music. But the rock music is what brings all the people and all the attention and all the money."

"I think the biggest thing we're doing is actually setting up a venue that is structured to put on events - not just rock concerts," Osborne said.