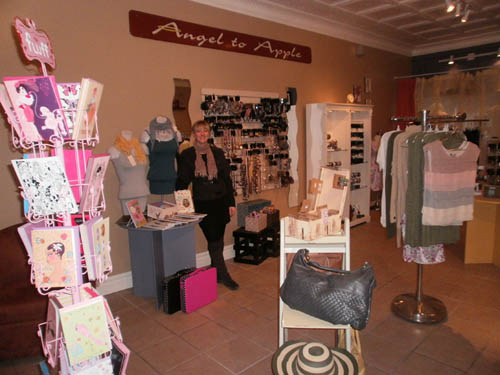 Angel to Apple owner Jamie Symmonds poses with some of her inventory.

Angel to Apple expands and rises above competition

Eager to expand her women's clothing boutique in size and clientele, Angel to Apple owner Jamie Symmonds relocated. At 451 Center St., Angel to Apple is now just three blocks down from its former location.

Although Center Street in the Village of Lewiston is small, being at the opposite end of the street makes a big impact.

Angel to Apple still has its regular, loyal customers, but since the move the store has seen some new faces, too.

"It is amazing how many people have found me at my new location" a surprised Symmonds said.

Her new location is not the only thing to be excited about. Symmonds recently opened an expansion to her store.  The back room now holds accessories. Before her move, Symmonds experimented with accessories, which did very well in creating a noticeable difference in her business.  Once she moved to the new location, she figured she had the space to expand upon her accessories. So, she took the chance.

Nervous about the reactions of her customers, Symmonds' spent late nights at her boutique in preparation for the big reveal. Overall, the turnout for the opening, on March 12, was "amazing" in the words of Symmonds. "Amazing day, amazing turnout." Customers who stopped by received giveaways, as well as discounts.

Symmonds extended the line of jewelry and purses she already carried and added belts, tights and stockings, shoes, hats, scarves, and gift-giving items. "Women love accessories," Symmonds stated.  These accessories not only create great gifts to give, but great gifts for yourself, as well.

Angel to Apple carries unique brands "It's what I'm drawn to," Symmonds said. According to the boutique's Facebook page, the objective is to stay current with top trends.

With summer right around the corner, Angel to Apple is currently selling the latest fashions for the season - everything from gladiator wedges to stand out heels, and floppy, brimmed hats.

Symmonds, who is a member of the village's Planning Board, said "I am always about progress and expansion for the village, as long as it is for the greater good of the community and those surrounding the development."

The building construction is expected to be completed in time for the summer tourist season. Angel to Apple's second story color is projected to match that of DiCamillo's, which is located between South Sixth and Fifth streets, just off Center Street.