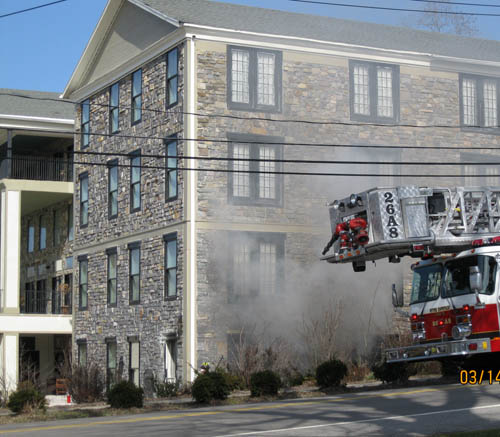 Firefighters wasted no time in responding to a fire Monday afternoon at the Barton Hill Hotel & Spa in the Village of Lewiston. (photo by George VanHoose)

The Barton Hill Hotel & Spa is still closed following a fire Monday afternoon at the 78-room Village of Lewiston inn. Owner Diane Finkbeiner said her business is "performing safety and maintenance checks in the best interests of ... staff and guests." She said her hope is that the Center Street hotel will reopen as soon as possible.

About 2:30 p.m. on Monday, smoke billowing through first floor room 126 triggered a quick response from local fire companies. Trucks rushed to the scene as firefighters entered into the four-story building to assess the damage and quickly brought the situation under control. Though an investigation is pending, it appears a UL-rated air conditioning unit malfunctioned, causing smoke to engulf the room.

"It was an inconvenience," Finkbeiner said. She noted the inn's "state-of-the-art" fire suppression system - including redundant systems, and "screaming" alarms and strobes - alerted staff of the situation and allowed responders to quickly quell the gray nuisance. "We're very, very fortunate. It could've been serious. ... (Firefighters) were very fast to respond," Finkbeiner said.

Lewiston No. 1 Volunteer Fire Co. Chief John Penzotti said, "When we got there, the room was closed up. We sent an interior crew in the front door."

He said it took firefighters about eight minutes to put out the fire. They also ventilated the room.

Onlookers noticed a large number of fire personnel happened upon the hotel.

"With any building in our business district, we have an automatic mutual aid agreement," Penzotti said.

Three engines - two from Lewiston No. 1 and another from the Youngstown Volunteer Fire Co. - and a ladder from Upper Mountain Fire Co. were all on hand to fight the fire.

"All the firefighters that were there worked great together as a team," Penzotti said.

No one was injured and the smoke damage was limited to one room - though the hotel doors and windows were still open Monday evening to reduce the smoky smell.

The room itself was being cleaned on Thursday and Finkbeiner said a carpet, curtains and furniture would be purchased to replace what was doused when sprinklers were activated. Adjoining rooms will also be patched up.

Moreover, "We're having each room checked that may have that appliance," Finkbeiner said.

She noted her husband, Ed, took extraordinary fire prevention steps when the hotel was built in 2007. At the behest of Village of Lewiston Building Inspector Ken Candella and Fire Inspector Blair McEvoy, the hotel is equipped with fire foam in all penetration areas. And, thanks in part to training the Finkbeiners received when they lived in California, Ed equipped the walls with twice the required amount of fire stops, encased ceiling boxes (lights, fixtures, etc.) in steel, and used 5/8 of an inch of fire-retardant aqua-board on the floors (beneath the coverings).

"It's a testament to how well this building was built," Finkbeiner said.

"All of that helped to keep everything contained," she added.

Finkbeiner was dismayed at rumors suggesting she and her husband intentionally tried to burn the building down. The family has encountered financial troubles with the hotel, but continues to make mortgage payments to its lender - and to honor the agreement reached earlier this year in State Supreme Court.

She pointed out several deterrents to foul play. The fire began in the room next to her office, investigative reporters from NBC's "Dateline" happened to be booked for rooms on Monday and, most importantly, "Our family works in the building. ... There's no way we would ever jeopardize (our family, guests and/or business)."

Finkbeiner said the hotel was experiencing "our best March ever," and that turning guests away "hurts," but "we're getting through it."

Those individuals with a room reservation were relocated. That included a honeymooning military couple, whom the Barton Hill Hotel staff put up at a Niagara-on-the-Lake hotel. Other guests who had reserved the hotel's soon-to-expire winter packages will be entitled to the same deals upon their return.

"We'll honor it for them anytime," Finkbeiner said.

The fire was the first such incident at the 4-year-old hotel.