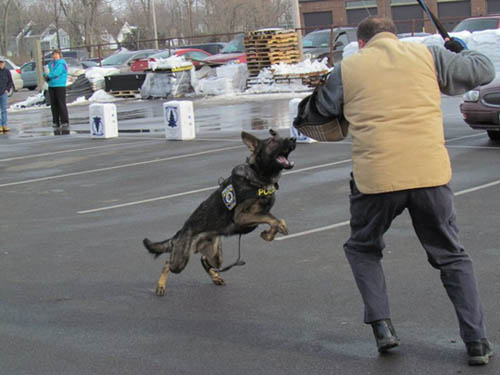 Cody ready to sniff out narcotics

Cody von Schlosser, a Town of Niagara employee, proved he has a nose for detecting narcotics.

The 18-month-old, 85-pound pedigreed German shepherd received his advanced narcotics detection certification on Feb.19 and is ready to nab his first criminal.

Cody, who lives with Town of Niagara Police Chief James Suitor and his family, already been on a call to assist the Niagara County Sheriff's Office on a traffic stop, but no narcotics were found in that case.

Suitor said Cody also is capable of protection work and probably will be trained for some tracking as well.

Cody is one of six canines trained for narcotics detection in Niagara County, Suitor said. The Lewiston, Lockport and North Tonawanda police departments each have one, and the Sheriff's Office has two.

Shown is Cody being trained for protection work at a training class in Hamburg.