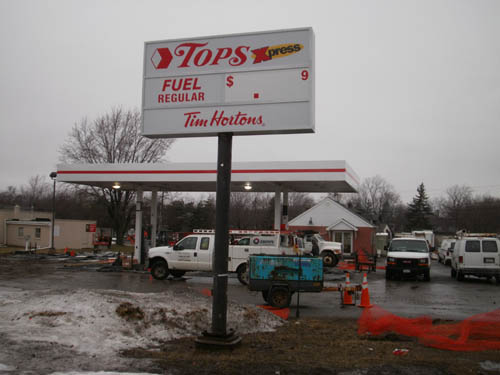 The Tops Xpress gas station now has the store's trademark logo and red and white stripe. (photo by Joshua Maloni)

Driving down Cayuga Street in the Village of Lewiston, one will see the new Tops Xpress store and fuel station is still a work in progress. The project is expected to be completed by Monday, March 21, for a soft opening.

"We are right on schedule with this week," said Anthony DiMino, owner of DiMino's Lewiston Tops. He added there have not been any major delays that have come in the way of the opening, but some recent snow after the spring-like weather was a bit of an interruption.

Despite the early absence of beer, the store will offer plenty of quick shopping needs, such as soda, bread, snacks, milk, lottery tickets and even Tim Hortons products. Diesel fuel will also be offered, which is not available at many gas stations in the village.

DiMino decided to purchase the vacant lot formerly known as Crown Mart gas station in September 2010 after realizing he was losing business from his village customers when they would redeem their bonus card gas rewards elsewhere. The absence of the fuel station at the Lewiston Tops was causing Tops bonus card members to travel outside the village to other Tops stores in the area. Not only were the shoppers buying gas at the alternative locations, but they also stayed and grocery-shopped, too. DiMino wanted to keep his business and also offer this added convenience to the village residents.

Tops bonus card members can earn points, which can be used to save money on gas purchases. For every dollar spent on groceries, card members earn one point toward gas rewards. Gas points can save Tops shoppers up to 50 cents per gallon of gas.

With gas prices once again on the rise, this is a great benefit for Tops bonus card members. Card members can redeem their points the last weekend of every month. This month, bonus card members have until March 12 to earn points, which can then be redeemed by March 26.

When asked if he was planning on having any grand opening celebration, DiMino responded, "We have not decided. ... There is a possibility of an event ... for redemption of points. That's what we are trying to accomplish."