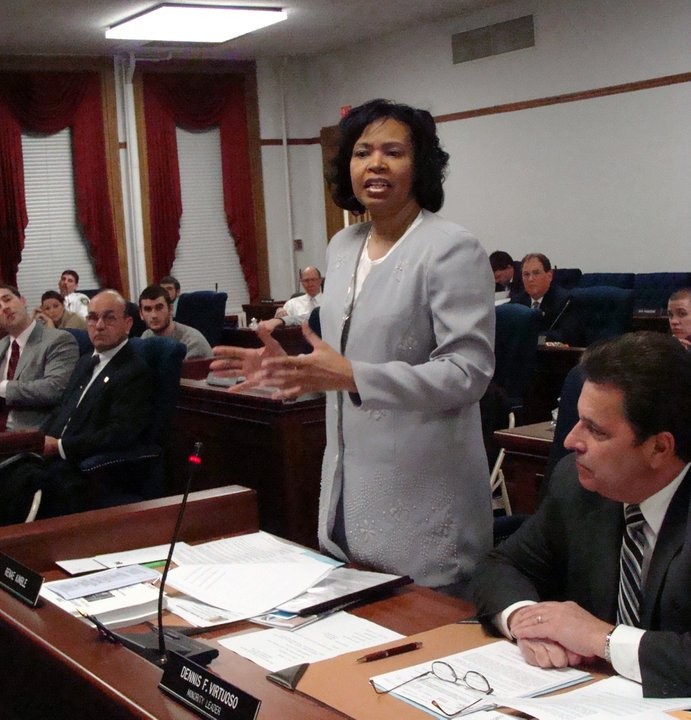 Kimble will not seek new term

Deputy Minority Leader Renae Kimble, D-Niagara Falls, announced Sunday that she will not seek re-election to the Niagara County Legislature this fall.

For Kimble, who plans to relocate after the end of her current term, the announcement was bittersweet.

For Niagara County, it also was the coda to a career of firsts.

Kimble, who, after 18 years, is the longest-serving woman to ever hold a seat in the Niagara County Legislature, was also the first African-American woman elected to the body.

During her nine terms, she also managed to, as both majority leader for the then-Democratic majority, and vice chairman of the Legislature, become the highest-ranking woman to serve in county government.

"It has truly been a distinct privilege, pleasure, and a blessing to serve the residents of Niagara County, especially in the 2nd Legislative District, for the past 18 years," Kimble said. "I believe that as a tireless advocate for the people, in an effort to better the quality of life for every Niagara County resident, that I made a lot of accomplishments, and I sincerely hope these accomplishments will be a part of Niagara County for many years to come."

Kimble cited her legal battle to establish a district that ensured representation for African-Americans as her proudest achievement, along with crafting the law that established the county manager form of government that Niagara County has relied on since 2003.

"I established the Niagara County Microenterprise Assistance Program, through which we've been able to create hundreds of jobs for residents throughout the county," Kimble said. That program provides loans and incentives to small businesses that are either operated by low-to-moderate income county residents or that create jobs for those lower-income residents.

"Being able to set up the Opportunity Zone program for distressed cities - the cities of Niagara Falls, Lockport and North Tonawanda - was a proud moment," Kimble said of the program.

Kimble also worked to prevent the loss of hospital services at Niagara Falls Memorial Medical Center more than a decade ago, when the heavily indebted hospital appeared on the brink of shutting its doors.

"I helped to set up Citizens Against Hospital Merger, which eventually saved Niagara Falls Memorial Medical Center from becoming just a psychiatric center," Kimble said. "It is today a full-fledged acute-care center that provides reproductive rights for women."

Kimble also worked closely with then-Attorney General Andrew M. Cuomo to bring about significant reforms to the Niagara Falls Police Department. Under an agreement reached by Cuomo and city officials, the police force was required to implement new policies governing the use of force after resident complaints about excessive force.

"This establishes specific systems, patterns and protocols so that the police now will be monitored for the next three years in an effort to make sure all residents of Niagara County are treated fairly and equally by the police department," Kimble said of the November 2010 agreement.

Kimble, who will be honored with a Women Making History Award later this month, was circumspect about what she will leave behind when the year comes to a close.

"I thank God for the opportunity to be a public servant," Kimble said. "It was the opportunity of a lifetime, and it is something I will always remember and I am extremely humbled by."

Then, she added one last thought: "I just wish every Niagara County resident the best in this upcoming year."