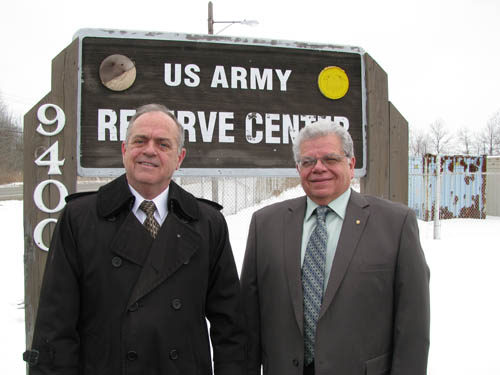 Army Reserve Center could be the right stuff for town

The Town of Niagara is hoping that the approximately 22-acre parcel, currently containing a huge gray hangar and several red brick and other outer buildings, will become an economic engine for the town.

The Army, this year, will complete its move from the Porter Road site to a new facility on the Niagara Falls Air Reserve Station on the other side of the runway. The Porter Road site was declared excess property in the 2005 BRAC (Base Realignment and Closure).

The Town of Niagara Local Redevelopment Authority was formed to develop a reuse plan, as was done in communities across the country affected by BRAC.

"We're trying to bring that four-letter word into Western New York, which is jobs," Dan Bristol, executive director of the town's LRA, likes to say about the plan.

With a $500,000 grant from the Department of Defense, the town was able to hire RKG Associates of Dover, N.H., and Alexandria, Va., to negotiate with the Army through this summer on conveyance of the property to the town. Bristol said RKG is one of the tops in the nation for this kind of work, having done similar negotiations for other BRAC-affected communities.

Town Supervisor Steve Richards is excited that this project that he has worked on for years seems to be finally coming together, with the town having a say in the type of business that goes on the property, new jobs for residents and an increase in tax dollars.

"No matter how this thing ends up, right now we get zero taxes from that property," Richards said, noting that even an Industrial Development Agency negotiated in lieu of tax payment for a new business will be a bonus for the town.

With the property's proximity to the airport and the availability of the big hangar with access to the runway, the town is looking at the possibility of high-tech, aircraft-related businesses such as air cargo, aircraft maintenance and testing or even pilot training.

Not only is the weather often clearer here, but "our skies are not as busy as Buffalo's," Richards said.

The town is talking possibilities with entities such as the Niagara Frontier Transportation Authority (owner of the airport), Calspan, the Niagara County IDA and the town's own IDA.

Bristol and Town Board member Marc Carpenter also traveled to San Antonio last month to attend the winter forum of the Association of Defense Communities, a lead agency for communities affected by base closures.

"We found the conference to be very productive and very informational," Carpenter said. "The most important dialogue took place between community LRA directors who had or who were going through their base closures. Finding out what worked best for them was very valuable for me, especially Debbie Olson, LRA director for the city of Riverbank, Calif., who gladly shared her tips, success stories and her knowledge in how she was able to win many grants for her community."

Richards said it has not been decided yet whether it will be better for the town to seek full ownership of the property and rent to business or to turn the property over to a developer through a public sale.

The hangar is in good shape and could facilitate a business right now, he said, while some of the other buildings are in poor condition and should be knocked down.

"No matter what happens there, at least we're going to get some jobs for local residents and some tax money out of it," Richards said.