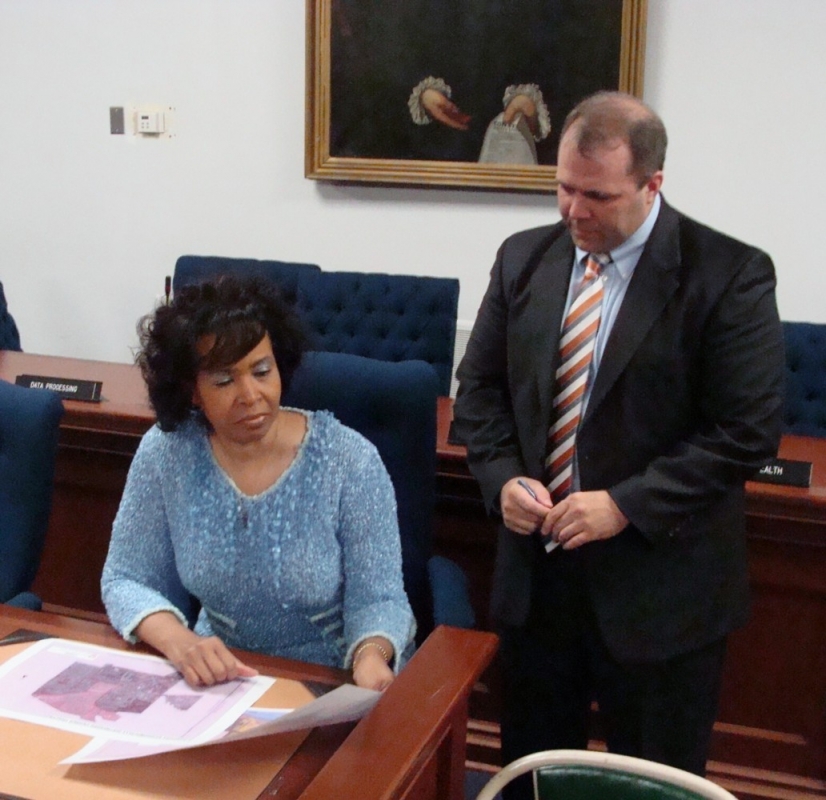 Niagara County Legislature Deputy Minority Leader Renae Kimble, D-Niagara Falls (left) reviews documents with Majority Leader Rick Updegrove, R-Lockport, prior to a public hearing at the Niagara County Courthouse in this undated photo. Kimble, the No. 2 member of the Democratic Caucus in the Legislature, is being honored with a 2011 Women Making History Award that honors her trailblazing election, nearly 18 years ago, when she became the first African-American woman to hold elected office in Niagara County.

Kimble to be honored as 'Woman Making History'

Eighteen years after becoming the first African-American woman elected to political office in Niagara County, Renae Kimble is being honored for helping to knock down one of the last barriers to entering local politics.

The Niagara Falls Democrat, who serves as the second-ranking member of her caucus in the Niagara County Legislature, will be honored March 26 at the "Women Making History Gala" sponsored by a Buffalo-based event-planning company.

Kimble will be joined by other successful local women leaders, including Rep. Louise Slaughter, D-Fairport, and Assemblywoman Crystal Peoples-Stokes, D-Buffalo, at the gala, which is being sponsored by Utopiann Euphoria LLC.

"I wanted to take part in honoring women who have had a great impact not only locally, but nationally," Utopiann Euphoria founder and CEO Debbie Allen explained. "Some of the women that we are honoring this year have really had a major impact on other peoples' lives."

Allen said she had met Kimble some time ago, and been personally impressed by her and her work ethic as an elected official.

"Renae Kimble is a very significant woman, and she has done a lot of great things in Niagara County," Allen said. "She was the first African-American woman elected to the Niagara County government, and opened a lot of doors. We wanted to recognize the work of great women, and her record speaks for itself."

A portion of the proceeds from the event will go to sickle cell research at Women & Children's Hospital of Buffalo and the planned United Hands of Hope House of Western New York, which will combat human trafficking.

Kimble said she hoped the event would benefit the local community, and was pleased to be honored as a "woman making history."

"It is an extreme honor to be nominated for such a prestigious award, knowing that people will recognize your achievement," Kimble said. "I'm thrilled to nominated with such an outstanding group of women, like Congresswoman Slaughter and others, who really have made a contribution to the quality of life for residents throughout the Western New York region."

Not that enough women have had the chance to impact others lives in Western New York, according to Kimble.

"We don't have enough women involved in all areas of our lives," Kimble said. "This really highlights women and puts the spotlight on women, especially with it being Women's History Month. And hopefully it will encourage young women to get involved with government, education and the legal profession as well."