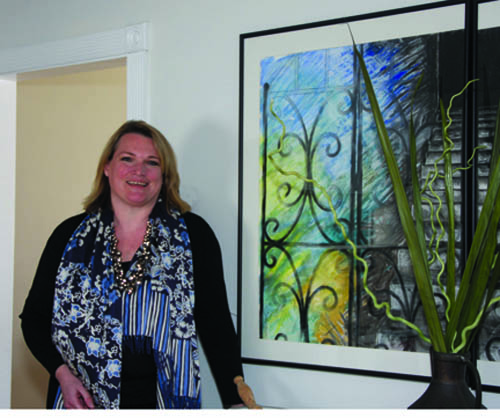 Alison Lytle reflects on her 'full-circle' experience and a return to her Lewiston roots.

'Coming Home': Lewiston woman drawn back to her roots

Editor's Note: In today's Sentinel, we begin a new periodic feature -"Coming Home," which profiles local residents who have returned to the area following time spent living in another locale. Readers with similar experiences are invited to contact the Sentinel at [email protected] to be considered for future features.

Photo and story by Janet Schultz

Twenty years in Italy and Alison Lytle has returned to her hometown - Lewiston. She left as a young girl following her dreams to become an artist and experience life. She has returned an accomplished artist, educator and the mother of two children.

The Lewiston-Porter graduate began her journey at the Rhode Island School of Design, where she received her bachelor's degree in fine arts, focusing on sculpture, studying under well-known artists.

She attributes her desire to leave and study art to the wonderful art teachers at Lew-Port and from her experiences working at Artpark.

An opportunity to study abroad for a year came her way and she flew off to Rome for the first time. At the conclusion of earning her bachelor's degree she received a scholarship to study and work at the Guggenheim in Venice.

"I assisted an Italian sculptor and had a fabulous experience," she says. It was at that time Lytle decided she wanted to stay in Italy. She went on a job search and took a position at the University of Washington Rome Center, where she planned and instituted programs for students. She assisted the campus by bringing in the Department of Practical Studies, Studio Art Department and the Creative Writing Department.

"I began understanding what it was like to run an actual foreign university, but an American one at the same time," she continued. "I loved it, I wanted to be an artist, an educator, and wondered how many things I could be when I grew up."

During her 10 years at the University of Washington, she received her Master of Science degree in education from the Bank Street College of Education and Parsons School of Design.

Lytle also found herself starting to miss the United States, but was not ready to move back. She was raising two children and teaching art at the International School.

"When you live abroad, you have this wonderful way of adapting," she explains. "You learn to live with a lot less."

"I think in many ways you become a better person."

"On the flip side, after living there for 10 to 15 years, you wonder if you are going to be there forever," Lytle continues. "You do start (to) have a yearning to get back to your own roots. It's a cultural homesick."

But as life would have it an opportunity arose for her to direct the University of Dallas Eugene Constantin Rome Campus program. There she could live with her family on an American-Italian campus, help students have a great year abroad and initiate programs with adults and high school students. It offered a range of experiences she found exciting.

"One day I'm helping students cope with anxiety and the next I'm cheering them on as they order a meal in Italian all by themselves," Lytle says. "The job was incredibility fun and satisfying."

She now was directing a program similar to the one that brought her from the Rhode Island School of Design to Italy years before.

Lytle also had some once-in-a-lifetime experiences working on special events for ambassadors and political officials when she worked with the Rhode Island School of Design's International Events and with the University of Washington.

"This was great for my kids," she says. "They grew up in this world with me and were exposed to the great atmosphere of the university, listening to debates at the lunch table and experiencing the culture and art of Italy."

However, Lytle also wanted her children to have the experiences she had growing up. Her son and daughter attended Italian school and all their studies have been in Italian.

Lytle explained that in Italy school goes from 8:30 a.m. to 2 p.m. and then the children go home for the large meal of the day with their family and do homework. "There is no lunch at school and students work very hard the hours they are there and bring home 'piles' of homework," says Lytle.

Lytle commented that the academics are excellent, but the system lacks extracurricular activities such as sports and creative experiences that students in the United States take for granted.

"I also felt they weren't getting the experiences that are so important to feeding your soul. I'm an artist; my daughter likes the arts and my son, sports. I wanted to come back and give them the opportunity of being able to experience all of those things, too," she says.

"I was making sure American students were getting the experiences of being in a foreign country and yet in a certain way I needed to give my kids the same by coming back to the United States.

"It was a mix of reasons why I came back, but I really accomplished a lot and felt I was ready for the next adventure," she says.

Lytle pointed out Italy also has a high unemployment rate, and when an Italian lands a job he stays in it forever. There is little mobility in employment, and it also limits a person's dreams and aspirations to move up or on to something new.

"Many people there have lost the desire to change things in their community," she explains. "They are learning to live with it.

"I was so attached to the culture, but that wasn't the environment I wanted us to spend the rest of our lives in. It wasn't necessarily my situation, but I watched friends who were living with it. It was getting to a point if I wanted to give my children something; it was a tool for the future.

"I wanted my children to see that you can fulfill your dreams, and in Italy that would have been hard," she says.

How all of her experiences will come full circle for her in Lewiston is uncertain, but Lytle knows that she wants to be involved in the arts and education in Western New York. Right now she is just re-entering her own culture.

"At a certain age, I think you realize growing up in a place like Lewiston, family comes first and they support you in whatever you decide you want to pursue," she explains. "You instill that in your children and a magnet draws you back to where you are comfortable."

For her, comfort is a home in the Village of Lewiston - very similar to the area where she lived in Italy.