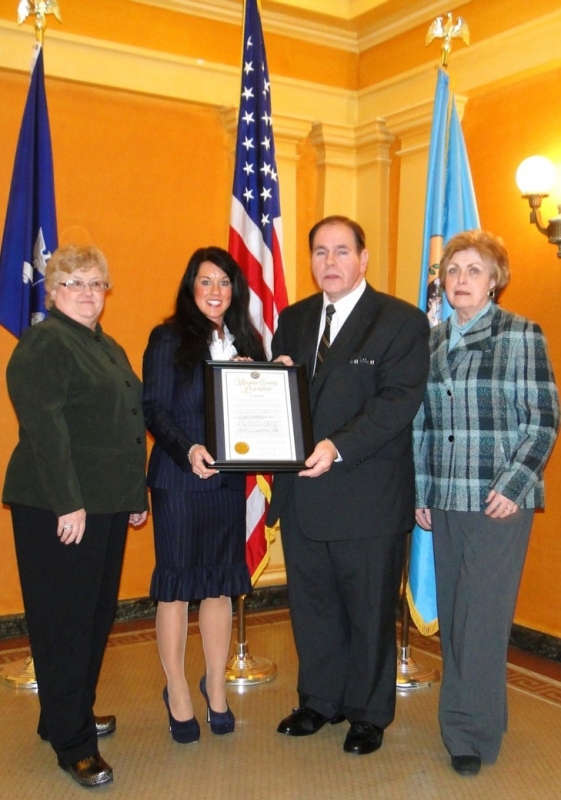 Niagara County Legislator Wm. Keith McNall, R-Lockport, a former Lockport School District board of education president, presents Orleans/Niagara BOCES Career and Technical Education Principal Dr. Melisa Niver with a citation from the Niagara County Legislature hailing her development of a Career Exploration and Awareness Camp for middle-school-aged children in the Lockport and Newfane school districts. Looking on at left is Rebecca Albright, BOCES board of education vice president, and at right is Bernadette Schultz, director of the YWCA of Niagara's Advantage After School Program. The YWCA program has served as partner to Niver as she developed the camp, which will offer students an opportunity to consider vocational career choices. The camp, which will be held at the Niagara Career and Technical Center in Sanborn, will be held later in the academic year.

The Niagara County Legislature weighed in favorably on a new BOCES program designed to give youth from the Lockport and Newfane school districts a taste of vocational careers and other options available to them after graduation.

In fact, they were so impressed by the Career Exploration and Awareness Camp that they even cited the visionary principal behind it.

Legislator Wm. Keith McNall, R-Lockport, a former Lockport school board president who often serves as the majority caucus's education point-man, introduced Orleans/Niagara BOCES Career and Technical Education Principal Dr. Melisa Niver to his Legislature colleagues Tuesday, telling them that Niver is "sympathetic when she needs to be sympathetic; she is strong when she needs to be strong; she is understanding, but she is firm in her decision-making."

The Career Exploration and Awareness Camp allows students from the Emmet Belknap and North Park middle schools in Lockport as well as Newfane Middle School to get a taste of vocational careers, many of which require trade certifications, so they can consider a full range of options as they enter high school.

McNall praised Niver for creating the career camp, noting that the principal had designed the camp around a very simple reality: "In this particular case, she realized that not all kids can go to college. And the trades are important, and this camp is all about the exploring of those trades."

McNall noted that many of these vocational fields pay good wages and require increasing levels of certification to gain access to higher pay, and that the career camp exposes area youth to opportunities in those fields, as opposed to liberal arts college classes.

"The education of our youth today must be committed to providing a high-quality education that offers opportunities for all students to learn," McNall said. "What's most important is that youth have the opportunity to become proud, productive citizens. And this camp provides that opportunity."

McNall said the driving force behind the camps has been Niver, who, by working with partners Kathy Granchelli, CEO of the YWCA of Niagara, Rebecca Albright, vice president of the BOCES board of education, and Bernadette Schultz, director of the YWCA's Advantage After School Program, had managed to tap funding from the New York State Office of Children and Family Services to create the camp.

"Dr. Niver had to work in collaboration with the YWCA of Niagara for these students from Lockport and Newfane to be able to take advantage of this camp," McNall said. "That's what opened the door in this particular case. The camp is now set up, it's going to be used, and it certainly will help kids."

According to McNall, Niver's bold experiment is all about preparing youth to be competitive in a tough job market with high unemployment by giving them skills that are in high demand.

"The Career Exploration and Awareness Camp will give students in Niagara and Orleans counties an opportunity to explore their fields of interest, and hopefully prepare them for when they head out into the job market," McNall said. "Dr. Niver's work at BOCES has provided an opportunity for those students who wish to enter a technical career an opportunity to do just that."

The camp will be held later in the academic year at the Niagara Career and Technical Education Center, 3181 Saunders Settlement Road, Sanborn.