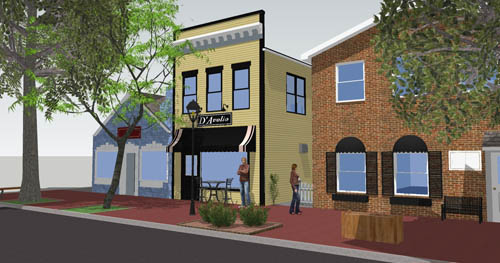 The expansion drawing for D'Avolio. (picture by Giusiana Architects & Engineer)

Business expansions in the works

The Village of Lewiston is once again in position to grow.

The first drawing was for a 19-by-30-foot first-floor addition to D'Avolio, the olive oil and specialty-cooking store at 449 Center St. The plan also calls for the creation of a 19-by-70-foot second floor.

"What D'Avolio is proposing to do is expand the back of the business on the first floor, itself, to include gourmet foods," Giusiana said. "And as part of the construction, they'll be looking to put on a whole second floor to be a one-bedroom apartment."

The second drawing was for a 20-by-24-foot, street-level addition to Hibbard's Custard on Portage Road and Center Street. The kitchen would fill in the empty corner toward the Natural Link meat shop side of the existing building.

"What they're looking to do is expand the custard operation to include hot dogs and hamburgers, fries - actual lunches and dinners," Giusiana said. "We'll be kind of cleaning up some of the inconsistencies in the architecture of the building."

The Hibbard's ownership is looking into acquiring the public land in front of the custard stand's Center Street parking lot (also known as "the triangle"). Giusiana said the expansion plan is independent of that action.

The third drawing was for a 60-by-120-foot expansion to Waste Technology Services at 435 N. Second St. WTS plans to build a tennis court for its employees.

"There's an existing fitness center in the basement that the employees are allowed to use, and this would be again an employee (amenity)," Giusiana said.

An environmental assessment form was completed for each proposal by the village's engineering firm, Conestoga-Rovers & Associates. Each project received a clean bill of health in the way of a negative declaration. None of the additions pose an adverse environmental impact.

Giusiana, who serves as chairman of the village's Planning and Historical Preservation Board, said no variances are required for any of the projects. He said he expects to present the plans to the board for approval on Monday. Giusiana also noted he would abstain from any and all decision-making related to his projects.

"It's so nice to see business in Lewiston moving forward," Mayor Terry Collesano said. Such proposals, he noted, indicate confidence in the community and the viability of retail activity in the village. "It's great to see this happen."