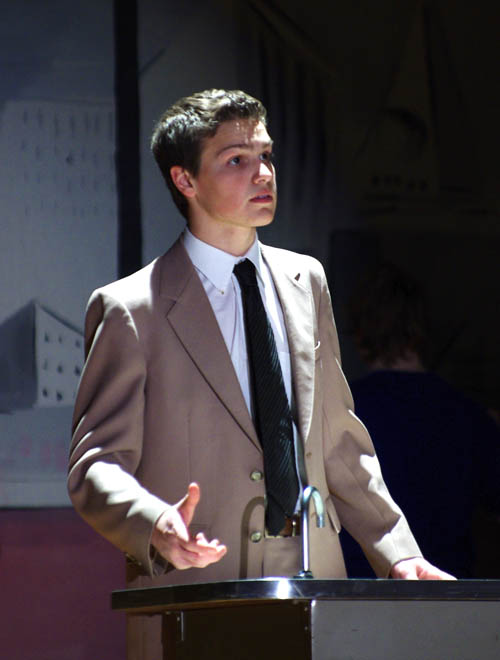 Alex Howard plays J. Pierpont Finch, a window-washer aspiring for bigger things in the Grand Island High School production of "How to Succeed in Business Without Really Trying." The musical comedy runs Feb. 3-5 at Grand Island High School's auditorium. Howard said Finch is "very, very ambitious. He's a little bit of a brown-noser, a suck-up, and he is completely focused on getting ahead and rising on the corporate ladder. I think along the way he doesn't recognize the fact that he has an admirer." (photo by Larry Austin)

This year's spring musical comedy at Grand Island High School is heavy on the laughs.

The music department will perform "How to Succeed in Business Without Really Trying" Feb. 3-5.

"In this musical specifically, it's about the comedy," said GIHS senior Alex Howard, who plays main character J. Pierpont Finch. The audience will hear songs that are "loads of fun to sing, to watch, to hear," he added.

Those who enjoyed last year's musical comedy "Thoroughly Modern Millie," a story about a young woman who intends to marry for money rather than love, will see some similarities in the story of Finch, a window-washer who aspires to climb his way up to the top of the corporate ladder at World Wide Wickets with the help of a special self-help book. With the instructions in the book, Finch begins "rising to the top with very little effort just by knocking down the people that are above him," said Jenna Cardone, who plays Rosemary, a World Wide Wickets secretary who yearns for Finch's attention. Howard said Finch is so focused on his personal ambitions that he overlooks her obvious interest.

Along the way, the audience will see a humorous take on the modern corporate world presented by a cast of 65, led by directors Michael DeDario and Carolyn Lokken. Martin Allen leads a pit orchestra of about 30 students.

"I think he's got a great singing voice and a strong stage presence," Lokken added.

Among the female leads, Cardone as Rosemary has an "outstanding, mature singing voice," with a strong personality, Lokken said.

Standouts comedicly are seniors Tom Rall and Kallan McMillan. McMillan, who plays the sexy airhead secretary Hedy LaRue,  "is truly an actress," Lokken said, while Rall, the boss at World Wide Wickets, has "a wonderful sense of comic timing." Dan Olszewski is the Bud Frump, the boss's nephew and Finch's chief antagonist.

"I hope they get a good laugh," Howard said of the audience. "I hope they're genuinely entertained by the comedy involved and the music as well."

"How to Succeed in Business Without Really Trying"

Topic: Tickets are $8 general admission for the evening shows with a special three-pass ticket available for $20. Tickets are available from all cast members. Tickets can be held on reserve by calling the high school music department at 773-8820, ext. 308-3007#.