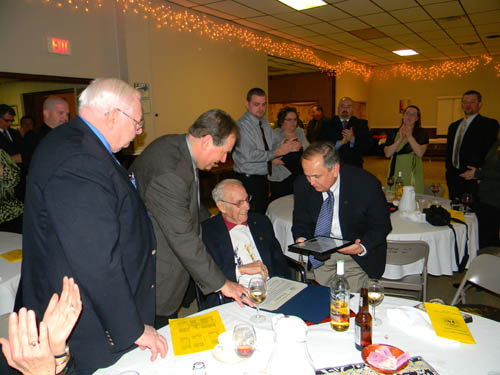 Lewiston No. 2 honors its own

That was again the case on Saturday, Jan. 22, as members of Lewiston No. 2 Volunteer Fire Co. gathered as they have for years - with friends and family at the Saunders Settlement Road firehall for an evening of good times, appreciation and celebration. Founded in 1942, the company observed its 69th year of service to the community that night. Included were inductions for Lewiston No. 2 executive officers, line officers, the ladies auxiliary, fire police and exempts.

The evening also saw special tribute paid to one of its long-term members, an individual who went off to serve in the U.S. Army Corps as a B-17 gunner during World War II, just as Lewiston No. 2 was founded.

John Linkowski of Lewiston was born in 1924. As a youth, he enlisted to fight for his country as millions of his peers did. He returned, worked, raised a family and continued to serve his community. Saturday his friends paid tribute to the 86-year-old member for his decades of service with Lewiston No. 2.

Linkowski first joined Lewiston No. 2 in 1976 and has held a number of offices throughout his nearly 36 years as a member. As is typical with fire company volunteers, he answered countless calls and has also spent immeasurable amounts of his personal free time in service to the company, working in the hall, running the fire company chowder picnic, working its social quarters, to name just a few tasks. "He is my friend, one of the first I ever met here," said No. 2 fire company associate Natalie Guiliani, who like many that night recalled fond memories and expressed appreciation to the elder for his service, his friendship to others.

"He is a valued part of our family," commented John Ceretto, Lewiston No. 2 member and 138th District State Assemblyman who presented Linkowski a State Assembly citation.

Ceretto was joined by State Sen. George Maziarz, R-62nd District, who shared his praise, particularly with regard to the man's service in World War II.

"You know, there's not many of them left," said Maziarz, telling the crowd of the special link this fire company member shares with those of "the Greatest Generation" who served in World War II. The senator went on to remind visitors of the gutsiness of the elder and that of his peers.

"He has given service not only to his fire company, but also to his country. He, like so many others, fought for us, our freedoms," said Maziarz. "Nothing we could ever do could return that favor."

It was sentiment shared by dozens of his friends that evening.