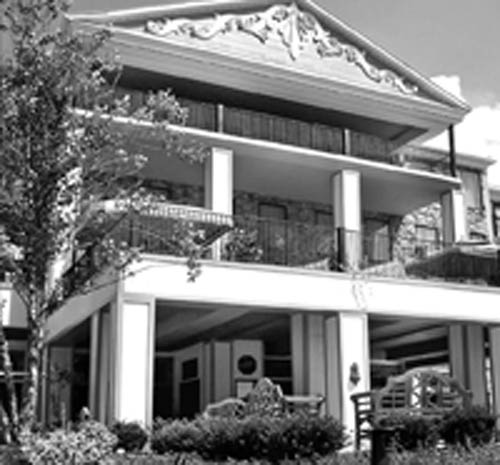 Edward and Diane Finkbeiner will continue to own and operate the Barton Hill Hotel & Spa in Lewiston under the terms of an agreement reached Thursday in a special term of the New York State Supreme Court. Justice Richard C. Kloch Sr. denied a request by CIT Lending Services Corporation/Iddleson Group to place the four-story Center Street hotel in receivership provided the Finkbeiners pay $30,000 in past-due mortgage payments on the 13th of each month.

CIT was the original mortgage lender. Iddleson is the current note holder. Gray said their combined action was initiated because the Finkbeiners had failed to make a mortgage payment in the previous 18 months. Moreover, he said the hotel owners had yet to make good on the promise of an outside investor.

A frustrated Kloch said he had "bent over backwards" to accommodate the Finkbeiners - he said CIT had, too - but he also acknowledged, "It's a bad time for anybody in the hospitality business."

Hogan said his clients had a plan to resolve the past due payments on their mortgage, which, thanks to interest, now stands at around $9 million. Gray wasn't biting, though, and said, "They've had a plan for months."

Kloch asked when it would be time for the hotel owners to throw in the towel.

"I know you've been talking to investors, but it hasn't happened," he said.

When pressed, Hogan took action. He presented a check for $30,000, promised an equal payment each month - and the erasing of the oldest tax lien (about $10,000) filed against the property within 30 days - and told the court the hotel's income was up 30 percent.

With regard to investors, Hogan indicated about a half-dozen international hotel chains had expressed serious interest in partnering with the Finkbeiners. Crystal Resorts International, in particular, had made attempts to secure $6 million in financing, but was stalled in its efforts due to the current state of the economy.

"We're trying to get money to give (CIT/Iddleson)," Hogan said, noting CIT, itself, had encountered financial difficulties and received federal bailout monies.

Kloch asked if there was a "drop-dead date" when the hotel owners would definitively know if an investor was in the mix. Hogan speculated an answer might be in place between May 1 and June 1.

Appeased, Kloch agreed to keep the hotel out of foreclosure. He warned, however, that one missed payment would result in the granting of CIT/Iddleson's request.

"If that isn't complied with, I'll give you your order," Kloch told Gray.

The judge set a follow-up court date of Feb. 24.

"My feeling is that the court recognizes that there are extenuating circumstances in the marketplace that affect a new operation," she said.

The payment schedule, Finkbeiner noted, is "a positive step in the right direction."

"We're showing good faith by making payments to our lender, and on our taxes," she said.

Finkbeiner suggested a receiver would not help matters, but would only cause an additional layer of expenses.

"A receiver is not a good thing for a property like this, because they cannot give it the care and attention and devotion that an owner will," she said.

Part of the problem, Finkbeiner acknowledged, stemmed from legal and material delays that pushed back the hotel's opening by about two years. She and her husband, while waiting to move forward, still had to pay interest on their property.

When they took out an $8.355 million mortgage in late 2007, "this property was worth considerably more than that," she said.

Finkbeiner said it's hard to tell just what the business is worth today. Discussions in the courthouse seemed to indicate the hotel's value is somewhere between $4 million and $6 million.

When the economy turned in 2009, Finkbeiner said she and her husband informed mortgage lender CIT that they would have difficulty paying the initial $63,000 monthly payment. Finkbeiner said CIT preached understanding and cooperation, but all the while sought to initiate a foreclosure process against the hotel. She said a representative from the company told her and her husband, "We're in the same boat you are, it's just a bigger boat."

On top of the mortgage situation, the hotel's PILOT program with the Niagara County Industrial Development Agency was suspended last year, as the owners did not make necessary payments-in-lieu-of-taxes to the county. Finkbeiner said that issue would also be resolved, and that her business has a non-PILOT contingency plan.

Despite their financial challenges, Finkbeiner said she and her husband now have options to lessen their debt and make good on past due payments.

The most promising scenario, she said, is a potential partnership with an international hotel chain. Finkbeiner said Crystal Resorts International put forth a decent investment strategy and "makes the most sense." That company, however, remains just one of a number of potential investors.

"The only thing we can do is continue to do business, do it well, and build this (company)," she said. "It's the only option that we have."

From day one, Finkbeiner has said hotels typically take between three and five years to stabilize. Now in its fourth calendar year of operation, the Barton Hill Hotel, she said, is succeeding.

"All things being equal, this is doing exactly what it should be doing now," Finkbeiner said.

As she and her husband continue to take steps to avoid further legal actions, Finkbeiner said, "We're going to use every tool, every venue, every legal solution to work this through."

"There is no option but to succeed," she said.

•Finkbeiner said she and her husband elected not to challenge a second foreclosure process, which was made against their property at 65 Center St. The former "Bloody Bucket" and Village Inn restaurant was most recently used as the hotel's spa. When the business owners decided to bring the spa operations inside (see related story), "that building was not a priority to the future of the hotel," Finkbeiner said.

Peter Sinclair of Tonawanda purchased the parcel at an auction last week.