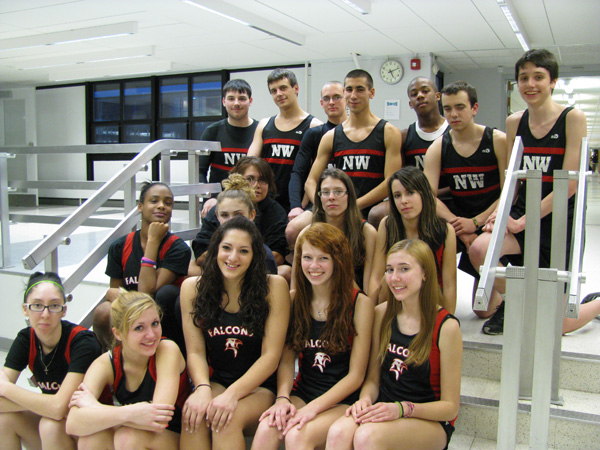 New N-W team off and running

Eighteen students are running in the halls every day at Niagara-Wheatfield High School. The universal school taboo was lifted, at least for these students, by the creation of a new girls and boys varsity indoor track team this school year.

"We started practice back in November, and our competition schedule is just getting into the meat of our season," said Coach Rick Pytlik. "We have 18 student athletes, a rookie coach and limited practice space, but the kids are out there running their hardest and doing their best."

Pytlik is a teacher at North Park Middle School in Lockport. A 1987 graduate of Niagara-Wheatfield, he ran for coach Dick Bartha - "400 hurdles was my race."

Some of the students joined the new indoor track team because they are involved in other sports and this is their off season.

"Too many kids don't do a winter sport, so they lose what they gained in the fall," said Pytlik, noting that when spring sports roll around coaches usually have to spend the first few weeks just getting the kids back in shape.

Junior Alora Brusino is a member of the N-W cross country team.

"If I don't have someone telling me what to do, I'd be lazy. I'm not going to lie," she said. "I'll be like in really good shape by the time outdoor comes along."

"I like to be busy," said junior Marina DiBartolomeo, who has been running since fourth grade and misses track during the winter months. "It (indoor track) helps me with my dancing, too."

On the other hand, indoor track is the first high school sport ever for junior Tyler Woods. He joined "basically to get ready for a career in law enforcement." Getting in shape as a distance runner will help him make it through the training requirements, he said.

Some just simply enjoy running. Senior Emily Zuniga likes all sports, but has found some extra benefits in running.

"It really clears my mind of everything. When I run, it's like a different world; I'm so completely unaware of what's around me, so concentrated and focused," she said.

Indoor track has other benefits.

Junior Zach Carr is a shot-putter. He likes going to indoor track meets for the opportunity to make new friends - "the people I compete against; I'm already friends with these guys," he said, indicating his teammates.

The students practice Monday through Friday after school and usually have a meet on weekends. They have to keep grades up to remain eligible for sports.

"Most student athletes do better in the classroom because they know they have to budget their time better," Pytlik said. Of his team of seven boys and 11 girls, three are on the high honor roll, six are on the honor roll and six are on the merit roll.

Junior Matt Frye knows he has to keep his grades up to be in sports. He plans to attend college in hopes to become a gym teacher. A member of the football team, he said, "Indoor track keeps me in shape and makes me a better athlete on the field."

Fellow football team member Forrest Mullen, a sophomore, said keeping grades up isn't a problem. "I balance it," he said, noting he gets homework done at lunch, in study halls and after class.

Indoor track is definitely not as big as outdoor track. Only three indoor track venues exist for meets in Western New York - Lancaster Central School, Buffalo State College and Fredonia State College - so students have to put in some travel time.

For those who run outdoor track, the big difference is the track is far smaller and consequently the races are shorter, Pytlik said. For instance, an indoor race might be 160 meters, compared to 400 meters outdoors.

Indoor track students don't win as a team, but as individuals. So far, a few of the students on the brand new N-W team have placed, and Pytlik is hoping at least some of them will qualify for the sectionals on Feb. 27.

In the meantime, N-W's team might do some groaning while Pytlik puts them through leg lifts and crunches on the high school hallway floor, but they're all smiles afterwards.