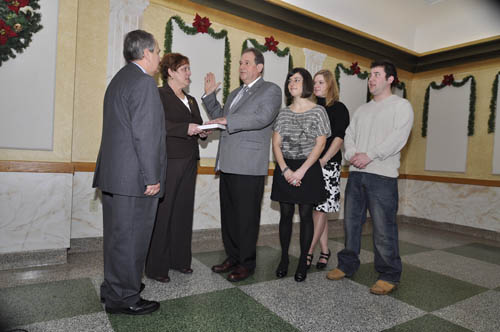 With his wife, Beth, holding the Bible, 138th District State Assemblyman John Ceretto was sworn into office by State Sen. George Maziarz last Saturday in a ceremony at the Como Restaurant. Joining him are his children: Theresa, Anne Marie and John II. (photo by Kevin and Dawn Cobello, K&D Action Photo)

Ceretto pledges to do best for area

"It's a very big day for Western New York, Niagara County and the 138th Assembly District," said State Sen. George Maziarz, R-62nd District, Newfane, as he led off swearing-in ceremonies Saturday for newly elected State Assemblyman John Ceretto, R-Lewiston. "You know, it's not easy serving in the Assembly in Albany in the Republican conference, but it's very effective."

Turning to his long-time friend and now colleague in the state capitol, Maziarz offered congratulations to Ceretto on the win, remarking, "It's a great step forward, a real tribute to you, John."

Before an overflow crowd of friends, family, elected officials, party faithful and local residents, Ceretto took his oath of office from Maziarz at the Como Restaurant in Niagara Falls as his wife Beth and children looked on.

"I'm overwhelmed, I'm humbled, it is a dream," said Ceretto. He spoke of his first impressions in Albany over the past week, and of his love and deep appreciation of his family for their faithful support. He also spoke of political aspirations, his background as a history major, his love and admiration of Teddy Roosevelt as a historical figure and longtime respect of elected figures.

Voicing appreciation to his family and friends for their support throughout the campaign, Ceretto expressed personal satisfaction of his political rise, which has included serving as Town of Lewiston councilman and representing the 12th District in the Niagara County Legislature. "This is what truly makes us Americans," said Ceretto, as he recalled his family's migration from Italy, their struggles in a new land and their constant drive to succeed as major influences throughout his life. "They left their friends and family in Italy to come to America for opportunity. It wasn't easy for them, but there was opportunities here."

"You work hard, you do the best you can, anything in America is possible," said Ceretto "They believed in the American dream."

Turning to present-day issues, Ceretto voiced frustration but also determination to take on in Albany what he considers the region's biggest challenge: its struggling economy. "Unfortunately, like so many others a lot of my family have left this area for jobs, for opportunities again," he said.

"And it's sad. And when will it stop when our family members are driven out of this area for jobs?

"That is my purpose in this office ... to bring those jobs back here," shouted Ceretto to lengthy rounds of applause.

"I pledge to you, I really, truly pledge to you, that I'll do my best to bring these opportunities to you. I want what's best for my children, my friends and neighbors."

Promising to fight in earnest for the area's interests, Ceretto told the crowd, "We have accepted the notion that Niagara County can be great again. We all won this election and we won it together.

"I'm so proud and humbled that I've been entrusted with your help. This election was not won by one person.

"I thank you all for believing in me. Together we made this happen.