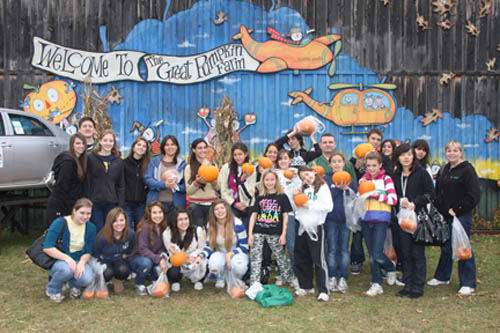 Lew-Port students and their guests from Colegio Juan Agustin Maza got a taste of the Halloween tradition at the Great Pumpkin Farm in Clarence. (photo by Janet Schultz)

When students from Mendoza, Argentina, learned they would be visiting the United States for a week, they decided they wanted to come and find out what Halloween was all about in the states.

Ten students and two faculty members from Colegio Juan Agustin Maza school arrived at the Lewiston-Porter School District campus on Oct. 17. They actually had a chance to visit Disney World before arriving in Niagara County.

Once here, they stayed with Lew-Port families and attended school with their hosts. They did the traditional tour of Niagara Falls with the Maid of the Mist, Cave of the Winds and a meal at Hard Rock Café. Then Halloween festivities began and they toured a "haunted" Fort Niagara, visited a pumpkin farm and ended with a Halloween social and trick-or-treating.

They and their hosts also experienced what life is like in both countries. At a special Town Hall meeting, the students took part in a question-and-answer period where they learned teenagers are similar and yet their lifestyles are different.

Students at Colegio Juan Agustin Maza wear uniforms and go to school from 7:45 a.m. to 1:30 p.m. for their regular studies in mathematics, literature and social studies. After lunch at home or in town, the students return for special studies in English as a Second Language, art, and music and to play sports. After that, they go home and do homework. Also at Colegio Juan Agustin, which is a for-profit school with two owners, students in grades 8 through 12 stay in their classrooms and the teachers move from room to room throughout the day.

"Students in Argentina don't work," explained Alejandra Gil-Posleman, program coordinator and English teacher at Colegio Juan Agustin Maza. "They focus on their studies and their money comes from the parents."

"They are provided for through university (college)," she explained.

The reason is simple: They need a higher education to get a job.

At Lew-Port, the majority of the students said they had jobs and worked evenings and/or weekends.

"Our students study a country each semester," explained Gil-Posleman. "One semester may be the United States, the next France, the next Germany and on. They study the economy, history and current events about each country."

When asked by an Argentine student how Lew-Port students view President Obama, they were surprised to find there were so many answers ranging from "He's doing what he can," to "He wasn't doing what he should."

When asked about cell phones, it was found all the students at Colegio Juan Agustin Maza have cell phones while the number at Lew-Port isn't quite that high.

"We do have a non-use in school policy," explained Gil-Posleman.

Argentina's biggest celebrity plays soccer, while here a number of singers and actors were named.

One other difference (even noted by this writer) is that when the Argentine students enter the room in the morning they give their teacher a kiss on the cheek. This is a tradition that definitely garnered surprised looks from the Lew-Port students.

The relationship between Lew-Port and Colegio Juan Agustin Maza began in 1996, but after 9/11 the exchanges were put on hold. Reinstituted in 2005, the exchange finds Argentine students coming here and the following year Lew-Port students visiting Argentina.

Gil-Posleman explained that Mendoza is very similar to Niagara County in that it is currently developing its wine industry and that with that is coming more foreign investors and growth in business.

"There are new factories, companies and wineries," she explained. "With that is a need to learn English because of the new business investors."

L-P High School Principal Paul Casseri sees the exchange, and exchanges with Belgium, France and Germany, as important to a student's learning experience. He explained that his ultimate dream is that a student from Lew-Port will join forces with a student from one of their sister schools and develop something that will impact the world.

"I want to give kids a chance to see outside their community," said Casseri. "For many of these students, they may never have another opportunity to look outside this community."