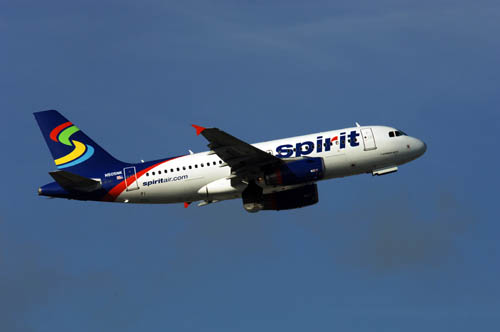 "Are we in good spirits!" he bellowed, then deciding his audience's response wasn't loud enough, made them do it over again.

"We hope to be here for a very long time and continue to grow," said Tony Lefebvre, Spirit's senior vice president for airport and inflight operations.

The flights to Fort Lauderdale will be on Mondays, Wednesdays and Fridays, with flights back to Niagara Falls on Tuesdays, Thursdays and Sundays.

Beginning May 5, the flights to and from Fort Lauderdale and to and from Myrtle Beach are planned for Tuesdays, Thursdays and Sundays.

The Fort Lauderdale-based Spirit, which is celebrating its 20th year, bills itself as an "ultra low cost carrier." Fares can go as low as $9.

"Spirit Airlines is all about choice," said Lefebvre, explaining that customers who buy a ticket are offered an a la carte menu of add-ons that they can select or not  to save money (such as baggage check-in). "At Spirit, we let you choose."

Connections can be made to other areas, including Latin America and the Caribbean. Spirit has more than 150 daily flights to 40 destinations.

The company has three sizes of Airbus planes. It will start in Niagara Falls with A319s, which carry 145 people.

Lefebvre said Spirit expects to employ about 15 to 20 people here.

"Spirit is exactly the kind of airline we had in mind when we built this airport," said Henry Sloma, acting chairman of the Niagara Frontier Transportation Authority, which operates Niagara Falls International Airport.

State Sen. George Maziarz, R-Newfane, has lobbied for improved facilities and expanded use of the airport since the late 1990s and led the charge to build the new $31.5 million terminal, which sent out its first flight last December. Maziarz remarked that he was glad Lefebvre had been brought in a way that he didn't see the old airport terminal. While in the past, passengers at the old terminal could be counted in the hundreds, "this year, over 60,000 passengers came through this terminal," he said.

Asked why Spirit came to Niagara Falls rather than Buffalo, Lefebvre talked about the number of customers who can be drawn from Canada and Western New York and the contract package Spirit was offered by NFTA.

"And the weather is better here," Maziarz remarked.

William Vanecek, NFTA director of aviation, said work is ongoing to attract new airlines to Niagara Falls, including international airlines, despite the economy. It's not an overnight process. First contacts were made with Spirit about coming to this area approximately 10 years ago, he said.

There are enough potential customers in this area that Niagara Falls' other low-cost airline, Direct Air, which also flies to Myrtle Beach and Florida (Punta Gorda-Fort Myers, Melbourne and starting in November, West Palm Beach) should not be affected. "Competition is a fact of life at airports," he said.

Lefebvre said Spirit already is the largest carrier out of Myrtle Beach and Fort Lauderdale. It has more than 60 flights a day at Fort Lauderdale alone, he said.

"Those low fares are what we're all about ... that's the value proposition offered to our customers," he said.

In addition to the Niagara Falls International Airport announcement, Spirit announced on Thursday it would be adding four other new destinations at airports at Plattsburgh; Latrobe, Pa.; Charleston, W.V.; and Dallas/Fort Worth.

More information about Spirit Airlines is available at www.spiritair.com.