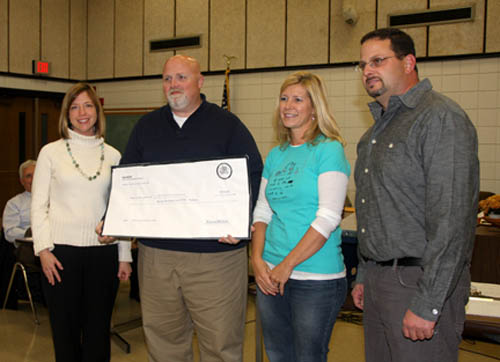 The Lewiston Porter Board of Education approved the appointment of Andrew Auer as the new principal in the Intermediate Education Center. Auer, a resident of Lewiston, comes to Lew-Port after serving the past eight years as the elementary principal at Royalton-Hartland Central School. Prior to that he served as an assistant principal and taught in the Rockland School District in downstate New York. He is a graduate of Brockport State College. He and his wife, Lisa, have three children who attend school in the Lew-Port district.

"It's with mixed emotions that I come to Lew-Port; Roy-Hart has been like a family to me but I'm looking forward to working here," said Auer.

The board also accepted a grant in the amount of $750 from Exxon Mobil Corporation, awarded to chemistry teacher Michelle Hinchliffe. Coppins Service Station in Lewiston sponsored the grant, which will be used to purchase scientific calculators and SMARTboard technology clickers.

Students from the Colegio Juan Agustin Maza in Argentina were introduced to the board. The students arrived here on Sunday, Oct. 17, for a two-week stay. International Studies Coordinator Amy Townsend gave the board a brief history on the exchange program and an insight into what type of school the students attend in Argentina.

"The Argentine students asked to come here this time of the year to experience Halloween," said Principal Paul Casseri. "They don't celebrate it and have seen it through advertising."

In that light, the students will be visiting a pumpkin farm and going to the Haunted Fort Niagara, as well as celebrating with Lew-Port students at a Halloween Dance. They will also be visiting Niagara Falls and taking a ride on the Maid of the Mist.

A brief Chinese language instruction class was provided to the board and those attending the meeting Tuesday evening by visiting Chinese teacher Xhang Li. Li is teaching Mandarin Chinese to students in the primary, intermediate and high schools. At the present time, Lew-Port music instructor Kevin Duncan is teaching English and music at Li's school in China.

The board was also recognized and thanked for its service by Superintendent Christopher Roser. The recognition comes during the annual Board of Education Recognition Celebration sponsored by New York state.

"You don't know the time and dedication it takes to serve until you've done it," said Roser. "I do know that every person sitting on this board has the best interest of the community, the school and the children in their work. Even though we aren't always on the same page, we get in there and it works. I thank you for your service," he concluded.

During the community comments segment, Jacqueline Lampman brought the subject of bullying to the board's attention, asking them for more actions to be taken to reprimand bullies. She explained that it has become a crisis, not only nationally, but also at Lew-Port.

"Constant terrible acts are being put on our children," said Lampman. "Some children are bullying the same victims and the same patterns of response are coming from the teachers and the parents. Those responses are not working. Kids are coming to school afraid, they feel powerless."

"I'm asking the board for a resolution and a policy that provides experts in the field to work with our educators in addressing how to handle this," she continued.

During the board's remarks, several members commented that bullying is a major concern and is taken very seriously by them.

In other board business: