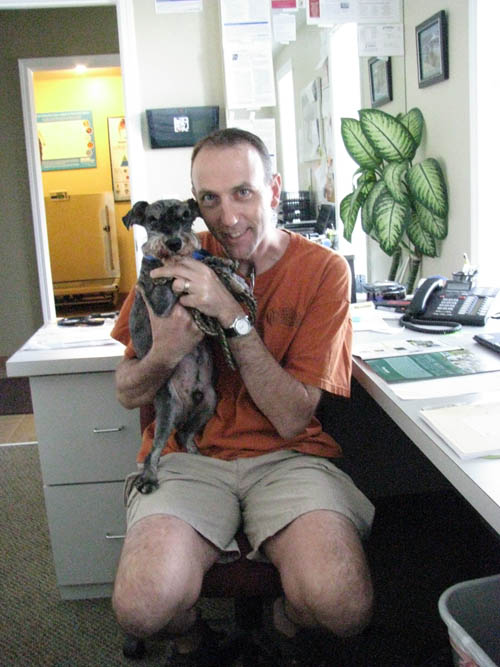 Dental health a must for pets

I almost lost my best friend this year.

Elliott has been my persistent shadow for 13 years. Close a bedroom or bathroom door in his face, and he'll knock until he either manages to push the door open or you open it for him.

Recently, he started refusing food, seemed to withdraw mentally and acquire that hollow-boned feel of an animal getting ready to die. His weight dropped by almost two pounds, too great a loss for a little miniature schnauzer.

Fearful that a tumor that had developed on his leg was cancerous, I took Elliott to see Dr. Martin Downey at Companion Care Animal Hospital on Niagara Falls Boulevard in Wheatfield. It wasn't the tumor. It was, of all things, Elliott's teeth that were causing the problem.

"Dental disease left unchecked is proven to contribute to heart disease, kidney disease and liver failure, as well as being a constant source of discomfort," Downey warns.

In Elliott's case, dental disease was advanced to the point that teeth needed to be removed.

"Just about every dog, after the age of about 5 to 7, needs to have its teeth cleaned," Downey said. "After 2 to 3 years of age, they already have tartar."

The ideal way to avoid tartar buildup is to brush your pet's teeth at least two times a week, Downey said.  Food slime left on the teeth after a meal starts to turn to tartar within 72 hours, so brushing once every couple of weeks isn't going to make a difference.

I always thought brushing a dog's teeth was something dreamed up by the movie industry. Remember the scene in "There's Something About Mary"? Apparently, most people think the same way. Only about 2 percent of pet owners brush their dog's teeth. Downey admits he doesn't brush his 2-year-old pugle (pug/beagle) Lola's teeth, but then as owner of a veterinary clinic, he has access to free cleaning.

Downey warns that pet owners should only use animal-approved toothpaste that is safe for them to swallow. Human toothpaste actually can be poisonous for pets.

Downey also gives Lola something to chew on every day, usually alternating rawhide chews with pig ears that he cuts into three pieces.

Good quality indestructible bones and dental sticks also work well, but dog biscuits really don't do a thing for teeth, he said, because a dog swallows them down within a couple of bites. "You need something that takes them five minutes or more to eat, so they're actually working their chompers."

In addition to treats, some dog (and cat) foods are now available that are designed to make the pet chew more than one or two bites, he added.

Downey doesn't advise using real bones, even the strong marrowbones I give my dogs, because of the danger of salmonella, the high fat content in marrow and the possibility of the bone causing diarrhea or a broken tooth.

"There's a multitude now of safer and very inexpensive alternatives," he said.

Taking steps to reduce tartar won't prevent the need to have your pet's teeth cleaned by a veterinarian, but it's likely to delay it or reduce the frequency, he said. That's something to take into consideration; pet dentistry does not come cheap.

"Few things that are more expensive in veterinary care than they are in human care," Downey said. "The one exception to that rule is dentistry, because of what is involved."

During cleaning, a pet needs anesthesia, and special care needs to be taken that no tartar gets into the throat and lungs. Dogs can't spit into a cup. The vet usually performs blood screening before the procedure, and during the cleaning, has the pet on intravenous fluids, while closely monitoring blood pressure, oxygen level, respiratory rate, heart rate and body temperature.

For people, like me, who are worried that anesthesia might kill an older pet, Downey notes that dogs and cats are extremely tolerant of anesthesia, and in the case of tartar cleaning, such a light anesthesia is used that it is extremely safe.

A routine cleaning takes about 20 or 30 minutes, unless teeth have to be removed.

In Elliott's case, the procedure took Downey 161 minutes and a record 31 teeth were removed.

Because of Elliott's age, Downey asked that Elliott come in the night before his procedure for tests and observation. Elliott wasn't happy to see me go, but as I left, they'd already turned the music on the radio to his favorite classical radio station and Downey's assistant was heading back to his cage with a piece of cheese from her lunch.

Immediately, after the operation the next day, Downey called me at work to report the results. In the background, I heard what sounded like an air raid siren going off. I thought ... wait a minute, I know that voice! I wanted to run for the car, but Downey assured me that Elliott had had a nerve block, so it wasn't pain, but the fear and confusion of coming out of the anesthesia that was causing him to howl. Someone would be assigned to sit by his cage and soothe him, just like a nurse talks to a human patient coming out of anesthesia, he said.

Today, Elliott is just about back to normal. Even though he only has six teeth left, he enjoys his food and treats, and has regained his lost weight. He's back to joining my other schnauzer, 7-year-old Nessie, in running the yorkie next door, up and down the backyard fence until Max is shrieking and gets in trouble with his owner for barking.

However, he hasn't forgiven Dr. Downey yet. Ever since he was frightened by the flash from a photographer taking a family portrait when he was a puppy, Elliott has always run to hide or turned his head away whenever a camera came into view. When we went back to Companion Care for his post surgery checkup, I took a picture of Elliott with Dr. Downey. Elliott looked straight into the camera sending a clear message -- get me out of here!
Categories
Tribune