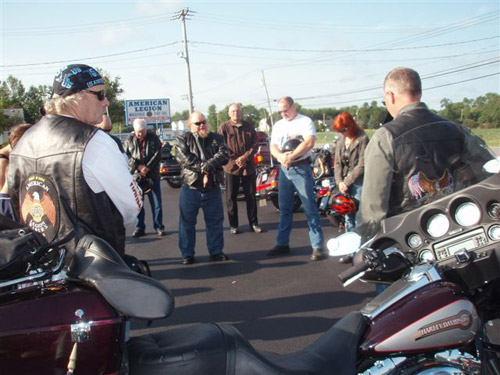 After a night of thunder, lightning and rain, the sun shone brightly the morning of Friday, Aug. 20, as the Legion Riders began their trek to Andrews Air Force Base in Maryland. At 9 a.m., 12 members of Wheatfield Post 1451 American Legion Riders mounted their bikes to escort Cheryl Lepsch, founder of Jammies for GIs, and a truckload of donated clothing and personal items to the air force base.  The 24-foot truck, donated by Double-Down Truck Repair, was packed with articles ranging from jammies to toothpaste, and included local flavor, such as Cave of the Winds slippers and Tonawanda Canal Fest T-shirts. The truck contents will be used to support the nation's wounded soldiers admitted to military hospitals around the world. Legion Rider Bill Cummings bestowed the blessing for a safe, trouble-free excursion before the group departed Wheatfield, traveling across Western New York, through Pennsylvania and ending at Andrews Air Force Base. (photos by Danny Maerten)